A balancing act at Bell Hill 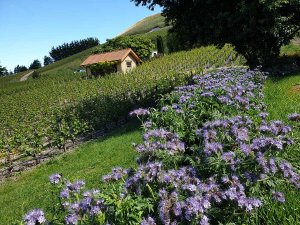 If Sherwyn Veldhuizen didn’t love her day job so much, the North Canterbury winegrower might spend all her time farming fungi.

Sherwyn and her husband Marcel Giesen, winners of Gourmet Traveller Wine Magazine’s Viticulturist of the Year 2021 Award, view their cover crops and compost with scientific curiosity, determined to enhance biodiversity “and the micro flora and fauna in the soil”, she says.

Talking of nurturing fungal communities, turning their backs on cultivation, and harnessing sunshine via plants to feed mycorrhizae, Sherwyn seems as excited by their “crazy project” as she was when they founded the Weka Pass vineyard and winery in 1997. The soils have high pH, which attracted them to the site but carry challenges, so they’ve looked to cover crops to help bring balance to the soils and promote the “fungal loading” required in a vineyard “to get that really good symbiosis with the vine”, she says.

The soils have high pH, which attracted them to the site but carry challenges, so they’ve looked to cover crops to help bring balance to the soils and promote the “fungal loading” required in a vineyard “to get that really good symbiosis with the vine”, she says.

“Basically, what we are trying to do is build carbon in the soil, and we’re doing that through cover crops, compost and carbon inputs such as wood chip.” In contrast, in the paddocks surrounding 2.5 hectares of vines, Sherwyn seeks a one-to-one balance of fungi and bacteria, which she describes as ideal for pasture.

Bell Hill is small but closely planted, with 1.1-metre row spacings and low fruiting wires. That adds to the challenges of the cover crops, and the past four years have been spent “cautiously” delving into that space, choosing plants that fit the site, with a diversity that covers the seasons and include key functions, including big tap roots that can open channels for the fungi and the microbes.

In the past year, there’s been another step change in how Bell Hill manages its vineyards, with a move away from the cultivating and undervine tilling common in organic management. “The bare ground is where the bacteria dominate,” says Sherwyn, who works to offset any necessary cultivation – in order to sow a new and diverse cover crop mix – by adding in “organic” stimuli including fish hydrolysate, fulvic acid and humates “to feed the fungi up again”.

It’s a big shift for the couple, and they’ve sought plenty of advice from consultants, studied the science behind the soil, and read up on experience-based observations of farmers over the past four decades. Their mission is to do the best they can for their soils, their property and beyond, says Sherwyn.

“It’s very exciting and it ’s very stimulating,” she says. It’s also “really important”, she adds. “There are so many challenges on us environmentally and climatically… I really feel all we can do is work the best in our own space.”