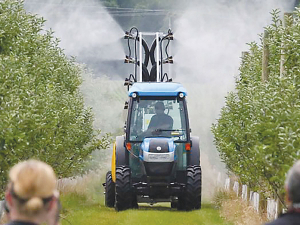 New Zealand's apple and pear industry is aiming to become spray-free by 2050.

The Government is investing in a sevenyear programme through the Ministry for Primary Industries’ (MPI) Sustainable Food and Fibre Futures fund (SFF Futures) seeking to reduce chemical spray use on apples and pears. SFF Futures is contributing $7.44 million to the $14.77 million programme, led by New Zealand Apples and Pears Inc.

“New Zealand apples and pears are popular around the world and we’d like to keep it that way by further boosting their sustainability credentials in high-value export markets. This research programme will develop innovative solutions to reduce spray and agrichemical use through new technologies, data, and information solutions,” O’Connor said.

Phytosanitary (plant health) standards for detectable pests and food safety standards for agrichemical residues are important requirements for New Zealand’s export markets. The European Union requires that most imported fruits and vegetables have a phytosanitary certificate, with many including apples and kiwifruit also including additional inspections upon arrival.

Fruit that doesn’t meet those standards won’t be allowed into those markets. In addition, Europe and Asia have set new targets for the reduction of agrichemicals by 2030, with the EU aiming to reduce chemical pesticide use 50% by 2030 and China increasingly banning the use of certain pesticides.

By 2030, the research programme aims to have further reduced pesticide application by 50% by using targeted and smart technologies. Achieving a spray-free status by 2050 would also reduce industry greenhouse gas emissions 35%, partly because of reduced application but also due to the reduced manufacturing and transportation element.

O’Connor says that for the primary sector to stay ahead of the game to achieve the ambitious growth targets- with horticulture exports expected to reach $6.9 billion for the year to 30 June 2022 – reduced pesticide use will safeguard export revenues to the tune of $1.1 billion between 2023 and 2030.

Worldwide pesticide use is being placed under intense scrutiny.

Current European Union regulations are aiming to reduce the usage of chemical pesticides 50% by 2030, with a French scientific seminar in June proposing the path to a pesticide free future.

In the last few decades organic farming using either natural pesticides or going pesticide free has taken the world by storm, with consumers in urban and rural areas increasingly gravitating towards the perceived benefits of a more natural system that relies less on manmade artifacts.

In China, overuse of fertilisers and pesticides has led to damaging effects on the soil as well as financial loss. Although the generally poor arability of Chinese soil necessitates the use of fertiliser and pesticides, often too much is applied, wasting money and resources and leading to unabsorbed fertiliser washing into water sources, which leads to acidification of soil and conversion into harmful greenhouse gases.

Despite the growing trends for organic or spray-free growing, it is likely that synthetic pesticides and fertilisers will be around for quite a while yet.