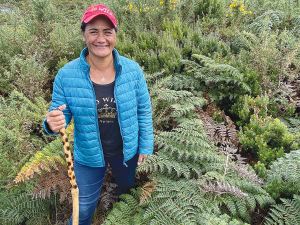 Kaai Silbery says Chatham Island gorse plants are one of the secrets to her highly successful and award-winning honey business.

Farmers are being told to spare gorse plants and let them flower – at least that’s the message on the Chatham Islands.

Kaai Silbery, the owner of Go Wild Apiary, says Chatham Island gorse plants are one of the secrets of her highly successful bees and award-winning honey business.

“Gorse is special for bees. It flowers year around on the Chathams and is the highest pollinating flower in the world. They are rich in protein and minerals for the bees,” she explains.

“I’m trying to convince farmers here to leave them,” she told Hort News with a slight tongue in cheek.

Despite being started only three years ago, in 2021 her business won the honey section of the Luxury Lifestyle Award International based in New York, and a gold and bronze in the Apiculture NZ Honey Awards.

The Gold award was for their newest product, freeze-dried honey, which is shipped to NZ high-end restaurants and now also available to individual consumers. It’s lightweight and can be eaten like lollies, but more commonly used to sprinkle on gastronomic creations.

The freeze dried honey is aimed at the fine-dining markets, which is an industry Silbery knows well.

She originally studied food science at AUT, then branched out to culinary art. She spent 25 years working as a chef in various restaurants, including most recently eight years as head chef at Hotel Chatham. She left only last year to devote fulltime to the honey business.

“I’m focussing on the luxury lifestyle with the honey. We are a boutique operation,” she says.

Later this year, Go Wild is releasing freeze dried honey and soy sauce, to be used to sprinkle into recipes calling for both ingredients. The packets take up less space than liquid bottles.

Go Wild’s main apiary has access to 15 acres for the bees to roam, and her family has 100 hives for their bees.

Silbery admits that gorse is not the only secret to the special and unique taste of Go Wild honey. The bees also feast on the endemic tarahina tree, which was once thought to be extinct until it was found on the Chatham Islands.

She says the tarahina tree makes Go Wild among the rarest honeys in the world. Silbery nurtures tarahina and gorse on her thickly planted acreage.

Developing a honey business is not easy on the remote Chatham Islands, 800 kilometres away from mainland New Zealand, the target market.

“Setting up a business here costs three times what it would on the mainland when you consider extra power costs and the freight costs,” she says.

Go Wild transports the honey in 15kg buckets by plane to Auckland to be freeze dried and packaged.

The buckets can’t be any heavier than that, otherwise the couriers won’t lift them manually and it costs extra for pallets and platforms for forklifts.

Fortunately, honey production doesn’t use too much power, which is four times more expensive than on the North Island or South Island.

Kaai Silbery is keen to help the local school children become skilled in bee keeping as part of the island’s legacy.

From Moriori, Tainui and Ngāti Kahungunu descent, her uncle Mana Cracknell recently passed and was instrumental in reviving the Moriori culture – as well as in developing the Chatham’s bee industry.

A current project for Silbery is helping the local school children in a bee class, where they make and decorate their own hives and learn how to care for bees when they take their hive home.

“Because we are a disease-free island, no honey is allowed to arrive on the island. The idea was to create a sustainable honey flow at home for the whanau.”