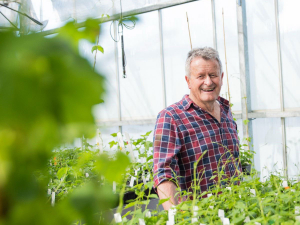 The award was presented at the Brewers Guild of New Zealand 2021 New Zealand Beer Awards in recognition of his outstanding contribution to the New Zealand hops industry.

Beatson has led the research and development of hop breeding and genetics for 38 years at Plant & Food Research.

Based at the Motueka Research Centre, he recently celebrated his 50th anniversary as a Plant & Food Research scientist.

“Dr Beatson is a leading expert in hops research. He is highly regarded by the industry, and well respected by his peers, collaborators and clients,” says Kieran Elborough, group general manager technology development at Plant & Foo Research.

“His successful breeding and selection of new hops cultivars have transformed the New Zealand brewing industry. Because of his foresight, we have the basis to keep producing new hops that will surprise and exceed the expectations of brewers and growers.

“The recent expansion of the NZ hop industry in area and volume is in no small part due to cultivars bred and selected by Dr Beatson,” says Elborough.

Craig Orr, chief executive of NZ Hops says that Beatson deserves the award for his achievements and dedication.

“Without his work, we wouldn’t have our hugely popular and unique hop varieties, such as Nectaron, Nelson Sauvin and others,” he says.

Almonds a high-value nut to crack

Another ‘nutty’ idea could lead to a brand-new almond industry in New Zealand.