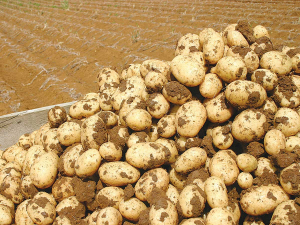 Potatoes NZ says domestic NZ fresh and frozen fries sales will have been impacted by the closure of hospitality in this Level 3 response in the Auckland region.

Also, the closure of Auckland fruit and vegetable shops during Level 3 last month led to a food surplus and waste among growers.

Potatoes NZ chief executive Chris Claridge says the industry swiftly adapted to lockdown alert Level 3 in Pukekohe and Level 2 elsewhere, just as they did during the first lockdown earlier this year.

“There have been difficulties, with border controls in Pukekohe/Auckland, which have hindered transit for staff,” he told Hort News.

“Sadly, the Government has again not allowed fresh produce shops to open during Level 3, which has again meant difficulties for supply chains and potentially this sort of thing will lead to food surplus and food waste.

“In saying that, growers have given surplus to food banks and charitable activities as they always do.”

HortNZ’s plea to the Government for fruit and veggie shops to remain open during the Level 3 fell on deaf ears.

The closure of Auckland fast food outlets and restaurants also dealt a blow.

Claridge says domestic NZ fresh and frozen fries sales will have been impacted by the closure of hospitality in this Level 3 response in the Auckland region.

“It is too early to see the economic impact on our sales data,” he says.

Claridge expects domestic sales to be affected in the coming months by hospitality activity, business closures and consumer activities.

Potatoes NZ has filed a tariff application with the Government for frozen fries imported from Europe.

Potatoes NZ chief executive Chris Claridge says the application was based on evidence.

The tariff application is sitting with Ministry of Business, Innovation and Employment (MBIE) and is under investigation.

“We made the application based on evidence of price and volume dumping from Europe into NZ,” says Claridge.

“We wouldn’t have been able to make the application without evidence, so yes we have seen and collected the evidence.”