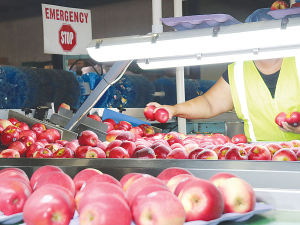 JR's is a family-owned apple and pear grower, packer and exporter based near Wellington. It has 90 hectares of apples and eight hectares of pears under cultivation and exports premium varieties to Europe, Asia and the Middle East.

Burns says JR's forecast is slightly ahead of NZ Apples & Pears' predictions of an industry-wide increase of 17% on the 2020 season.

"Apple size is up by two counts on all varieties, due to near-perfect conditions... natural rainfall has boosted size and quality," he explains. "After the past two seasons off the back of a drought, this is a pleasant change."

JR's grows and markets four pear and six apple varieties to Asia, Europe and the Middle East. Pear season began on February 28 and apple season on March 3 - with Royal Gala apples the first.

"This year, we're back to full strength with seasonal workers under the Recognised Seasonal Employers scheme," Burns explains. "In 2021 we had the fruit but only 17 workers (of 70 required) to pick it... the entire industry was down by 25%."

Around 35% of JR's fruit was exported to Europe, 30% to the United Kingdom and 25% to Asia. The rest went to the Middle East and its developing market in India, which is now surging after a long Covid lockdown.

However, Burns says while forward-planning had equipped JR's Orchards to grow its markets despite two years of global disruption, the Russia-Ukraine conflict presented a significant new challenge for exporters.

This included the shutdown of Black Sea ports amid global sanctions stranding over 100 merchant and container ships in the area.

"We can produce the best crop with excellent fruit size, but we can't control the global market," she adds. "Another pressure for New Zealand exporters is the horrendous cost of shipping... nearly double what it was last year."

Burn says with Russia shut, fruit and vegetables from around the world are landing in Rotterdam (Europe's largest seaport).

"This will cause major disruption to supply lines and drive prices down - and that's before fruit from the Northern Hemisphers arrives," she adds. "We'll be working to expand our customer base into Asia until the situation improves."

Gaining momentum from the global roll-out of its new brand in July, NZ fruit company Rockit has recently launched its biggest sales and marketing campaign.

The apple and pear sector is sitting on a knife edge waiting to see how the latest Covid outbreak will play out in the coming months.