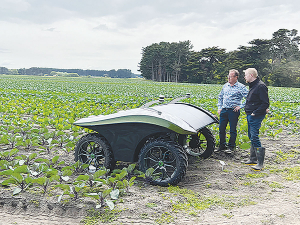 Greentech Robotics’ WeedSpider is a fully autonomous robotic-weeder is designed to remove weeds quickly and accurately from commercial vegetable fields.

“There’s a real practical value that comes from being able to jump on a tractor and work with soil, plants, and people,” he says. “That grounding gives you a great headstart.”

Sandbrook is chief executive of Palmerston North-based agricultural and horticultural robotics company Greentech Robotics. He left school at 15 and worked in 36 different jobs before setting up his own business.

“I’m a bit weird,” he says. “I can visualise a machine in my mind and build it.”

While working as a technician at Massey University, he worked on a direct drill seeding system he describes as “a heap of junk”.

“It was designed by academics with no practical sense of the problem it needed to solve,” he explains. “It had no practical application, but I could see a way to make it simpler and more effective, but nobody would listen to me because I was just a technician.”

Determined to build something better, Sandbrook spent weekends and late nights trying to invent an accurate, automated seed dispensing system. Like many entrepreneurs, he thought producing the idea was the hard part, but quickly found that dairy farmers didn’t need a seeding system to grow grass.

The turning point came when a Wattie’s representative saw the system at Fieldays and asked if it could sow carrot seed.

Sandbrook modified his machine to cater for carrot seed and Wattie’s planted 40 acres using the first iteration of the SeedSpider, resulting in a perfectly spaced, weed-free crop of baby carrots.

Wattie’s introduced Sandbrook to a leading UK supplier of fresh produce and salad greens, which led to relationships with distributors and growers all over Europe, but the US market was a tougher nut to crack.

Potential US distributors were reluctant to look at crops grown in Europe saying, “show us some crops in America planted using the SeedSpider”.

Bloody-minded persistence at a Las Vegas trade show led to a 2,000-acre trial, which resulted in a 10% increase in yield compared to an existing seeding system. Today, up to 80%* of salad and baby carrot crops in the US are planted using the SeedSpider.

Sandbrook is convinced that “sheer bloody-minded persistence” remains the key to building a global business.

Greentech Robotics has a bold mission to future-proof farming by developing innovative robotic capability across the agricultural and horticultural sector. Currently set to launch WeedSpider in the US in late 2022, the fully autonomous robotic-weeder is designed to remove weeds quickly and accurately from commercial vegetable fields.

Said to address the pain point of labour cost and supply for growers, current research shows 55% of US farms are experiencing severe labour shortages. Additionally, population growth will see demand for food increase by 70% over the next 30 years.

While the WeedSpider won’t replace migrant workers, it will boost productivity and increase yields.

Even though most of Greentech Robotics customers are overseas, the company is still based in Palmerston North, and is focused on taking on the world from its own backyard.

“We’re fortunate to be able to hire a lot of bright young minds out of Massey, including a lot of their best mechatronics graduates,” Sandbrook adds.

“Many have grown up on a farm, so they have a real practical, can-do attitude. I consider coming from New Zealand to be a massive advantage over any other country in the world, with no real barriers to innovation.”