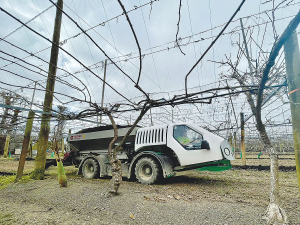 The orchard spreader is built low and narrow to deal with the restricted access typically found in orchards.

From an early age he had an interest in technology that saw him heading down the diesel mechanic route then chasing the cereal harvest in North America.

On his return to New Zealand in 2015 he spotted an opportunity to service the orchard industry in the Gisborne area. This led him to form W G Geuze Contracting, which now has five employees and looks after around 150ha of kiwifruit, 20ha of apples and 400ha of citrus crops.

The range of services the business offers includes spraying, mulching, mowing, ripping, grass seeding and fertiliser/ compost application. The latter tasks are entrusted to a specialised Giltrap Engineering Orchard spreader that arrived at the business around four years ago.

Based around the Waikato company’s expertise in larger agricultural spreaders, the orchard spreader is built low and narrow to deal with the restricted access typically found in orchards. However, despite its small stature, the unit offers a 2.5 cubic metre capacity from its 4.9m long, 1.66m wide and 1.48m high dimensions.

In the case of Geuze Contracting, the “spreading” season typically runs from around April through to November. They start out with vermicast applications in the winter, applying granular fertilisers, powdered products – like gypsum and lime – before moving onto compost application, up until the time of flowering later in the year.

The unit features a stainless-steel hopper and – in this case – a tandem axle and large flotation tyres. This helps spread the load and also reduces compaction on the region’s heavy clay soils. The standard spreading element is based around twin discs at the rear for use with a wide range of materials.

Options include single or double banding attachments or a double-belt system for compost delivery to the base of trees. This increases the versatility and extends the operating season of the machine.

Geuze notes that the switch-over of spreading elements only takes around five minutes, making changing between tasks easy and ensuring the machine is always set up for the best results.

In an industry that is increasingly looking for information on application rates – alongside proof of placement – the machine is configured with an automated rate controller. This allows the operator to ‘dial in’ the required application rate, which is maintained irrespective of forward speed. This is achieved via an integral weighing system, alongside a GPS tracking system that delivers the placement data.

“The Giltrap is such a well-built machine, with some great engineering and attention to detail,” Geuze explains.

“Having done a huge amount of work there are no real signs of wear and tear – even after nearly four years of use.”

He adds that it’s easy to use, extremely accurate, while any operational or service issues can be dealt with by a quick phone call.

“That even runs to Giltraps using a computer simulator system to diagnose any problems we might come across.”

This confidence has resulted in a second spreader arriving – minus its chassis and running gear.

This unit is unique in that it has been converted in-house and mounted to an Atom self-propelled sprayer chassis, to offer a spreading service that treads lightly.

Geuze says this make it more manoeuvrable and more productive, while incorporating the fundamentals of the Giltrap Orchard Spreader.

Fastrac fans will be breathing a sigh of relief knowing JCB has launched what it describes as an “all-new electronics infrastructure” offering on its latest Fastrac 4000 and 8000 models.