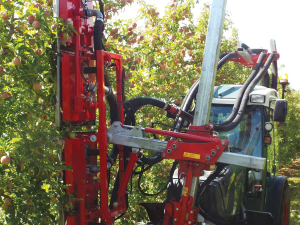 The ERO Impulse pneumatic defoliator delivers a pulsed flow of compressed air to shred and remove the green leaf material from apples during the ripening stages.

At a recent demo day in the Hawke's Bay, TRS showcased a New Zealand-designed and manufactured machine, with the aim of increasing the quantity of premium quality, pickable apples, while reducing labour costs.

The machine delivers a pulsed flow of compressed air to shred and remove the green leaf material from apples during the ripening stages.

By allowing more light to penetrate the crop canopy, the onset of ripening is brought forward, while the vibrancy of colour is also markedly improved.

"There are also major production gains, given that in a typical season, orchardists will typically 'pick' the orchard three times to take fruit as they ripen," explains TRS's Chris Clifford. "Using the pneumatic defoliator results in major colouring changes in 10 to 14 days and usually reduces the picking passes to just two events."

The system comprises a front linkage mounted tool carrier/tower that can move through four different axes. This in turn carries a selectable configuration of twin-rotor distribution heads that direct the air flow into the crop canopy. Depending on the orchard layout, the rotor heads can be stacked vertically to deal with a taller wall of fruit, or 2D formats, or in tandem to operate in more conventional 3D layouts.

A rear-mounted, heavy-duty compressor sends air forwards to the distributor heads, where in the first instance it enters a manifold/gallery. This creates a "pulsed" effect as the rotating nozzles pass by.

The machine is said to be easily adjustable to change air pressure or rotor speed to suit the crop being managed. The unit normally passes through the orchard at a forward speed of 1-2km/h, with a typical horsepower requirement of around 100hp.

TRS notes that the development stages showed that a "pulsed air flow" is required to shred the leaf material, as a constant flow of air will just "bend" leaves away from the air flow, from where they will quickly return to their original growing position once the machine has passed.

The modular design of the system tower on the front linkage means that it is also capable of carrying the ERO/Binger OBS Orchard Trimmer, thus saving the capital costs of two separate machines, while facilitating overall canopy management.