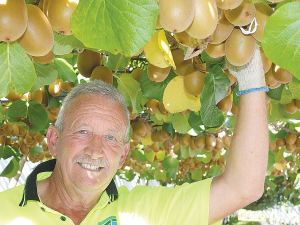 But the reality is that while Ellison may be a good fisherman, he's one helluva good and highly successful kiwifruit grower. He's been in the industry since he obtained a horticultural degree from Massey University in the late 1970s.

His is a family business, based at Te Puke, started by his father-in-law in 1968. Ellison and wife Karen bought into the business in 1987, which he says was not exactly a great time given it was the year of the sharemarket crash.

Like most kiwifruit growers, Ellison has had to deal with the highs and lows of the industry - most notably PSA in 2010 - and they are still transitioning into G3 and moving away from green.

Today, the Ellisons have a total of 127 hectares of kiwifruit, spread across three separate orchards, which they purchased between 1991 and 2005. Two thirds of their orchards are planted in SunGold G3 and one third in the new red variety.

"The reason for getting out of green was that G3 is a lot more rewarding in every sense and we have taken on the red as a challenge," Ellison told Hort News.

"We have picked the green block and it went well, but we can do a lot better out of G3 and we can do better out of red. Our fruit goes to the USA, Europe, Japan and China, but Asia is out most important market," he adds.

For Ellison, and his family, this has been a bumper season with a record 200,000 trays picked. He says this is even more remarkable given that it's been picked off just 10.7 of the total 12.7 hectares of the property. The reason for this is about two hectares are transitioning and not in commerical production.

“The reason for the big crop is because it’s one of the best growing seasons we have ever had,” he told Hort News.

“We had a very good bud burst, followed by a benign spring and not too much wind in December, and we have had reasonably regular rainfall this summer.”

The picking season is pretty much over and he now has the chance to try and catch that elusive trout in rivers near and far. And while he loves his fishing, Ellison says he will always be a kiwifruit grower.

It’s the lure of fruit not fish that really motivates him in the end.

Robbie Ellison says the new red variety is ideal and the fact that it is a licensed variety is an advantage because its production is controlled.

He says there are challenges in growing red, one of which is fruit drop – meaning that unless it is picked at exactly the right time the fruit will drop off the vines. Ellison says there can be a similar problem with SunGold as well but notes that if it’s just a fraction of 1%, they can cope with it.

“With red, the chances of fruit drop can rise quickly and this provides challenges in terms of picking,” he explains.

“We picked our red much slower than normal, just to make sure that we didn’t pick soft fruit, because if the soft fruit gets into the pack house it becomes explosive and then a juice can get on other fruit and you can quickly lose a lot of fruit,” he explains.

“So, you have to pick hard fruit and pick it early. Because red has just been commercialised and is still in its infancy as a variety, we are still trying to work out the optimum time to pick red.”

Ellison says the trials with red have been going for five years and reckons this is not long in reality as it takes time to get used to seasonal variations.

He says the other issue with red is that it is very fragile and tends to mark easily.

He concedes that they may need to provide artificial cover for this particular variety.

In some ways, this goes against Ellison’s view of artificially covering kiwifruit. None of his orchards are covered, but there are extensive shelter belts around them.

“I think there are as many disadvantages with covered as there is without, and we manage our hail risk by being on three separate sites anyway,” he explains.

“Personally, I believe that cover delays maturity and lowers dry matter in some years. It’s also not that pleasant to work under and I just don’t think we need it. I would put our production up against anyone’s under cover.”

While there has been much talk this year about a shortage of people to harvest horticultural crops, Ellison says they don’t have a problem.

His son Scott runs the picking gangs and through his contacts in the ski world, he’s got a group of backpackers from overseas and NZ who pick their crop.

“So, all our pickers here are backpackers, but 50% are New Zealanders who have come home,” he told Hort News.

“We have put in accommodation in the shed and we have got a kitchen, shower and toilets. Most [of the backpackers] travel in their vans – so they need ablution blocks, lounge and kitchen facilities. This year Scotty has moved to our holiday home so the backpackers have taken over his home as well.”

He says they work flat out all day and they make good money – about $30 an hour. Ellison reckons they work hard to get bonuses and make as much money as they can, to fund their next adventure.

Kiwifruit is a Kiwifruit is a key sector for the country's horticulture industry and contributed almost $2 billion to communities across NZ in 2020. Covid-19 has thrown a major spanner into the country's harvests by severely limiting the number workers, many of whom would usually come from overseas. Mike Murphy of NZ Kiwifruit Growers Inc. talked with Bay of Plenty grower and employer Sean Carnahan about the challenges.

We'll pick them all!

Kiwifruit is just too valuable not to be picked and despite the challenges of labour and weather, it will be picked.

Zespri is looking at increasing its cool store space - both in New Zealand and overseas - as a consequence of shipping problems caused by Covid-19.