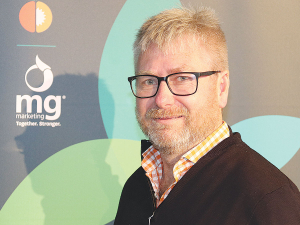 Jones, who is chief executive of 45 South - based in Central Otago and one of the largest cherry growing operations in NZ - says the huge expansion of the industry has taken place during the last three years. He reckons the issue of labour, along with logistics, was always on the agenda. However, he says Covid-19 has brought this forwards and believes these are the two major headwinds the sector is facing.

"It's the ability to attract enough people to do the work and it's not just seasonal workers I am talking about," Jones told Hort News. "It's actually the key expertise that's required to grow the right piece of fruit for a start - because if we haven't got that, we have nothing.

"We have got potentially 1,000ha of cherries in Central Otago and we need people to pick and pack them. In the Covid environment, with the borders close, that is very challenging," he adds.

"As an industry it's about how can we attract the youht to come and be horticulturalists and where are the cohorts going to come from in the future if this Covid thing goes on longer?"

Jones says all growers have struggled in the past couple of seasons employing more kiwis and getting the productivity our of them. He says they (young kiwis) do think differently to what earlier generations did and his company is now at the stage of planning for a fruit season that has normally been a seven-day-a-week operation.

"But we are now planning on working five or six days a week this season because these young kiwis are here not just to earn some money, but it's their holidays as well," Jones explains.

"So, we are trying to provide an environment where they not only can come and earn some money to tide them over to next year, but also allows them to have a holiday as well. That's got its challenges because it means we will probably have to employ more people to do the work, but it's about making its attractive enough for them to come for a start."

Jones says money is not necessarily the issue, but he notes that seasonal work can be financially rewarding. He says what the industry now needs to do is pay more attention to the pastoral care of Kiwi workers in the same way that is done for RSE workers. He says this may include having to provide accommodation.

"We have got young kids, who are possibly away from home for the first time, living in different styles of accommodation. We have got to be thinking about homestays for those kids and taking them to the doctor if they are sick, which is what we do for RSEs.

He says the recruitment process needs to start in the schools but believes part of the problem is the negative message that is widely spread in the community.

"The publicity is all about the shortage of pickers, and there is a career, but there are young guys working in our packhouse who talk a completely different language to me," Jones told Hort News. "They are sitting there running computers and machines which are taking photographs of cherries and are doing the work that people used to do," he adds. "That is the investment that is coming into packhouses and the opportunity is there for people."

Jones says automation needs to be driven into the cherry industry and in packhouses is the obvious place for it.

He says modern growing systems will also lead to automation in the orchard.

"I often ask myself, will we pick cherries [using] robots rather than people as we currently do? Probably not in my lifetime, but it will happen one day and it is happening with other crops."

Jones says automation is vital for the industry to reduce its reliance on labour.

"We got there in the end" is one Central Otago cherry orchardist's summation of the summer fruit season now winding up.