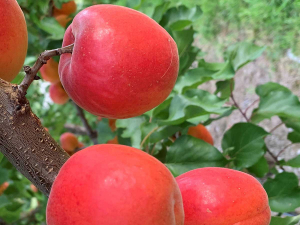 Two thirds of the orchard are set aside for new apricot varieties.

The rest of the area has been allocated for red and white-fleshed cherry production.

The new apricot varieties were originally bred by Plant and Food Research at its Clyde site in Central Otago and are being commercialised for the first time.

“It’s an opportunity to produce an outstanding flavoured fruit – it’s what a true apricot should be.”

He says New Zealand’s unique market position in the run up to Chinese New Year allows cherries to achieve a consistently high price.

Bruce Jolly, whose family have been breeding sheep and cattle at Ardgour Station since 1955, says he became interested in diversifying the station’s land use into horticulture after a 2000 study found much of the property was climactically suited to stonefruit.

Hortinvest was commissioned in 2016 to conduct a feasibility study to develop a portion of the land for orchards.

“Although much of the station was deemed suitable, the site chosen has the best attributes including the nature of its contours, drainage ability and that is frost-free,” Jolly said.

He adds that horticulture is one of the few sectors that allows the producer to maintain control of the product from orchard to consumer.

“It’s exciting to be producing something so sought after and special,” he said.

AVO is the latest orchard development undertaken by Hortinvest in Central Otago. Other developments include Tarras Cherry Corp which will harvest its first commercial cherries this summer.