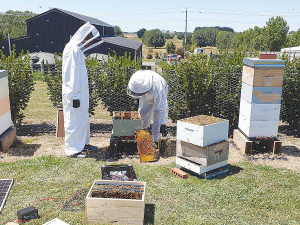 Hivesite’s Varroa treatment solution is based on heater panel – powered by a solar panel – that delivers a temperature of 39 to 45 degrees C, which kills the mite but not the bees.

Bees play a vital role in the pollination of most commercially grown crops, but the arrival of a Varroa mite infestation usually results in a colony failure and a huge loss of production in the growing crop.

Now a group of Waikato-based inventors look to have addressed the problem and, along the way, walked off with the Grassroots Prototype and the James and Wells Innovation awards at the recent Fieldays Online Innovations Competition.

The Hivesite team, made up of father and son Alistair and Gareth Bell – alongside James Emslie and Vijay Prema – have developed an in-hive treatment that autonomously uses heat treatment to destroy the Varroa mite.

Originally, the team set out to detect the mites in a colony using camera and artificial Intelligence. However, they quickly realised that finding a solution to break the life cycle of the infestation was a more important path to follow.

Their solution, which avoids the use of pesticides that can decrease honey production, consists of a heater panel – powered by a solar panel located under the brood zone of the hive. The heating element delivers a temperature of 39 to 45 degrees C to the area, killing the mite, but not the bees – which already use temperature to protect themselves.

An integral micro-processor automatically raises the temperature in the hive every three weeks for a period of two hours, to coincide with the 21 days it normally takes a bee to gestate from an egg to an adult.

In the case of the mites, one foundress or female can create seven offspring –usually found in the brood area.

These are destroyed at an early stage by the heat, thereby breaking the breeding cycle of the pest.

With one solar panel able to power four, 10-frame Langstroth hives, the system is particularly suited to commercial operators – particularly those operating in remote areas.

With this in mind, 12 hives will be fitted with the technology for testing during the new honey season. Future developments will see the development of real-time, remote hive monitoring.

“We were impressed using technology to enable an efficient and innovative and self-contained system that uses heat to kill Varroa without the need of chemicals,” the awards judges said.

“As well as providing a non-chemical approach to addressing the Varroa mite problem, a critical issue for apiarists both home and abroad, we were impressed by the potential for added-value through applications enabled by the technology which extended beyond the core purpose.”

Apiculture NZ is seeking assurances from authorities that the country’s beekeepers won’t be faced with the same problems that their Auckland colleagues did when that region went into lockdown.