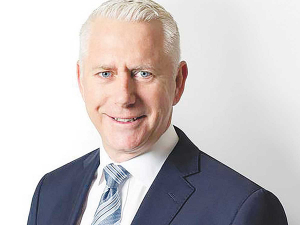 NZ-bred Envy apples, developed and produced by T&G Global, had a record season last year with a 23% increase in international sales.

This generated more than a billion dollars of sales in 2020, with plenty of growth predicted ahead.

T&G chief executive Gareth Edgecombe says independent research has forecast that another 25 million TCEs will be needed by 2030 to meet potential consumer demand, especially in China, Vietnam, Thailand and the USA.

The company is currently producing about five million 18kg boxes of apples a year. However, Edgecombe expects to be producing 15 million boxes a year within three to four years as established orchards mature.

He claims the apple had two main attributes, which attracted prices between 25 and 50% over other types such as a Gala, Red Delicious or Granny Smith.

“It grows really well for growers, so there’s really strong profitability that comes out of the ground operations from it,” Edgecombe explains.

“However, most importantly, it’s also a fantastic apple from an eating perspective. Consumers’ feedback is that it’s sweet, crunchy, crispy and just a really great experience.”

“Envy is one of the real success stories in New Zealand’s horticultural sector,” Edgecombe says.

The apples are grown under licence in 13 countries and sold to consumers in over 60 countries in the 12 years since the product was first launched.

“It’s a great example of New Zealand intellectual property to the world, where we can take what has been developed in New Zealand, protect it, and then scale it up at large scale both here in New Zealand and offshore,” he adds.

“I think it’s really great for New Zealand to celebrate, and we need to do more about across the economy.”

Edgecombe says the Envy apple is not as well known in New Zealand, because most of the produce was sold overseas and local consumers preferred a sweet and slightly tart apple, such as Jazz.

“In in 2019 [Envy] was voted the number one apple for taste, appearance and texture by consumers in the USA,” Edgecombe said.

The apple was developed by T&G’s partners at Plant and Food Research in 2008 and is a cross between Royal Gala and Braeburn.

Meanwhile, Edgecombe says his company has a pipeline of new varieties of apple in various stages of development.

Around 20 hectares of T&G Global’s mandarin orchards in Northland have transformed to a later-season variety over the past two years – via a dose of kiwi ingenuity and clever grafting.

The first apple to be commercially released from the Hot Climate Programme is receiving rave reviews from growers in Italy, France and the UK, according to horticultural company T&G.

A Government-funded hemp research project into the restoration of soil in vineyards has led to a new export skincare line.

A new report estimates the gross output of Māori horticulture in New Zealand is around $220 million per year.

NZ-bred Envy apples, developed and produced by T&G Global, had a record season last year with a 23% increase in…

The first apple to be commercially released from the Hot Climate Programme is receiving rave reviews from growers in Italy,…

Leading New Zealand fresh vegetable grower LeaderBrand says it is thrilled to be cementing its roots in Pukekohe, South Auckland.