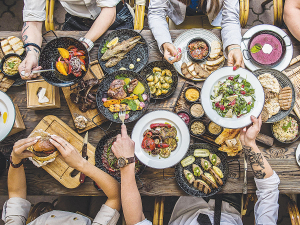 New research shows that more New Zealanders than ever are eating the recommended daily intake of fruit and vegetables.

However, people are struggling to find the time to prepare fresh produce.

The survey, conducted in June this year by independent research company NielsenIQ*, found 40% of Kiwis are getting at least five servings of fruit and vegetables each day.

Meanwhile, the 13% who only ate one serving in 2017 has decreased to just 9% of the population.

Carmel Ireland, project manager at The 5+ A Day Charitable Trust, which commissioned the research, is pleased with the increasing popularity of fresh produce.

"It's great to see New Zealanders are, on the whole, eating more fresh fruit and vegetables as they are proven to be one of the best sources of nutrition for all the whānau," she says.

Despite growing numbers enjoying the benefits of a diet high in fresh produce, the survey identified several hurdles that prevent shoppers from adding more fruit and vegetables to their supermarket trolley.

“Since our last survey in 2017, the number of families concerned about the price of fruit and vegetables has dropped significantly, while concerns about the time involved in food preparation is becoming a much more important factor for shoppers,” says Ireland.

Even with rising inflation in NZ’s post-Covid economy, only 36% remain concerned about prices of fruit and vegetables, a drop of 12% since research conducted in 2017.

Meanwhile, nearly 20% found they lacked the time to prepare or cut up fresh produce.

“We’re seeing an increasing trend of timepoor families that have less and less time to prepare home-cooked meals with high quality fresh fruit and vegetables. Many of our retailers are recognising this change and producing ready-touse, pre-cut vegetable mixes to enable whānau to serve up easy, healthy dinners in a hurry,” Ireland adds.

In addition to preparation time, storing fruit and vegetables is also a common concern for around 20% of shoppers. New Zealanders throw away an estimated $2.4 billion worth of food each year, much of it fresh produce that has gone to waste.

“Meal planning is a great way to reduce your food waste and ensure you use up every bit of the groceries you’ve paid for each week,” says Ireland.

“Weekend meal preparation is also growing in popularity as a smart habit to make sure you have nutritious meals every night of the week and don’t have to rely on takeaways when you’re stretched for time.”