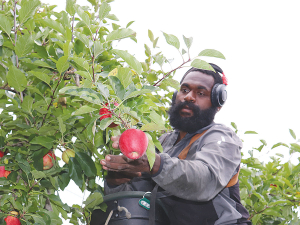 The apple sector is heading for a very good season in 2022, but warns that without more RSE workers from the Pacific it will be a disaster.

The apple and pear sector is sitting on a knife edge waiting to see how the latest Covid outbreak will play out in the coming months.

NZ Apples & Pears chair Richard Punter says all bets are off and there is a high degree of nervousness in the sector as it watches and waits for developments. He says the sector should be heading for a very good season in 2022, but if they can't get RSE workers from the Pacific, it will be a disaster for the industry.

"The consequences are unthinkable if we don't get these people," Punter told Hort News.

"Last season should have been a billion dollar season, with the new plantings that have gone in and the existing crops we had. It was a good looking crop, despite the hail in Nelson. But the damage caused by a lack of RSE labour cost us dearly."

Punter says, a few weeks ago, everything looked good with the news that the Government was working on protocols to bring in RSE workers from the Covid-free Pacific islands.

"Our management team had been working with NZ officials on getting those protocols established and also working out the protocols with the Pacific island governments around repatriation," he says. "The Government said, reasonably, if they can't be repatriated you can't bring them in - but all this is now up in the air."

Punter says he's still hoping that the situation will improve and he hasn't had a call from Wellington saying it's 'game over'. However, he adds that the officials are very cautious and, at this point in time, he has no idea what may transpire.

The Cost Of The Lack Of Labour

NZ Apples and Pears says it's estimated that about 15% of last season's apple crop was not picked, mainly due to the labour shortage, with the hail event in Nelson also having a minor impact.

He adds that logistics of getting product to market all conspired to make 2021 a pretty challenging season. Pollard says it was particularly hard for the small growers who have just one crop and one harvest - whereas some of the larget growers have other crops besides apples and are able to cope better.

Like his chairman, Pollard is fearful of the consequences of border closures, which will prevent RSE workers from Samoa, Tonga and Vanuatu coming to work in NZ orchards for the coming season.

"The other issue is that, due to Covid, there are significantly fewer backpackers in the country whom we also greatly rely on. We are also facing intense competition for labour from other sectors beause everyone is desperate for workers."

Pollard says having sufficient labour for the pruning season, which reaches a peak in November, is the immediate priority. But he adds, that is closely followed by the main picking season, which begind in February.

Pollard says they are also waiting to see if there might be split alert level lockdowns in the country and trying to work out how to deal with that. He says the sooner they can get some certainty and get back to normal operating procedures the better.

"Right now, it's a case of the calm before the storm," he says.

The future for apples

China remains the largest market for NZ apples - taking 17% of the crop.

The apple industry needs to work hard to get more New Zealanders to work on orchards to replace the backpackers that, until Covid, provided a significant proportion of the sector's workforce.