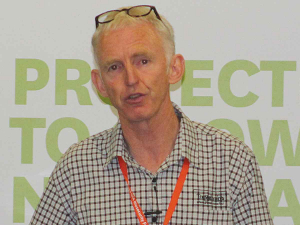 James Trevelyan leaned on his international contacts to help his business manage and thrive through the Covid crisis.

The experience of PSA – and the way Italy and China dealt with Covid-19 – shaped how Trevelyans Packhouse proactively manages their way through the Covid pandemic.

Te Puke-based Trevelyans is one of the largest packhouses in the Bay of Plenty. The company packs kiwifruit, avocados, limes and feijoas. It also provides orchard management services.

Managing director James Trevelyan told Hort News that when word of Covid first came on the radar, his mind immediately turned to 2010, when he was in a meeting with the then boss of Zespri discussing what was happening with PSA in Italy. He says when PSA arrived in the country later that year, he had a good understanding of what was needed in NZ.

Fast forward to January 2020 and Trevelyan was talking to a friend in Italy about the Covid-19 crisis who was involved in the kiwifruit sector in that country.

“When I put down the phone, I quickly realised that we needed to act now and talked this through with my team,” he says. “From then on, I kept in contact with this friend to learn how the Italians were dealing with the situation. I also had a friend in London to keep me briefed on the situation in Europe.”

The other person who also helped Trevelyan more effectively manage the Covid crisis was a Chinese cleaning lady at the packhouse.

“She was from Wuhan, the centre of the epidemic, and I started asking her about how her family were dealing with the pandemic,” he told Hort News. “Later, I made contact with a Japanese man and the information that these people provided helped shape how we dealt with the crisis.”

Trevelyan says social distancing was a problem, but screens were erected to protect staff and there was a strong emphasis on meeting hygiene requirements. He admits that production at the packhouse ‘creaked and groaned’ during Alert level 4. However, he says in the end they got through the crisis better than many others.

Trevelyan estimates that he spent $500,000 dealing with Covid-19. This included obtaining extra labour, screens and tents and extra hygiene facilities.

“But I am just so happy and relieved that we have been able to work and be relatively Covid free,” he says.

James Trevelyan says his company has an excellent health and safety manager who is very thorough and, at an early stage, started preparing to deal with Covid when it arrived in NZ.

“For example, our smoko room normally can hold 200 people, but with the restrictions on social distancing it could only hold 40 people – so we had to hire tents to cater for staff,” he told Hort News.

“To add to the problems, in alert levels 4 and 3 we lost all our older workers.

Meanwhile, about half of our overseas workers, whom we normally employ, could not get into NZ and other staff had also left. So, we then started recruiting locally.”

Many of these new workers came from the tourism sector, others were drivers and some from professional backgrounds. But this was no easy ride, Trevelyan says.

Some of those recruited, he says, lasted just a day and at one stage the turnover was about 100 a day.

He says the retention of staff got better as the crisis went on and people realised that having a job was important.