In praise of RSEs 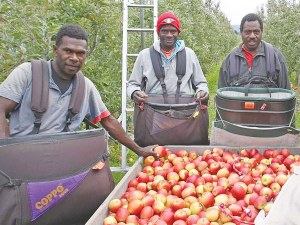 For orchardists like Paul Paynter, getting sufficient people to pick their apple crop is a challenge.

He would normally employ about 700 workers, but this year it's down to 550. Paynter says they try to get Kiwis to work for them and some are good, while others are not so good.

The age range for pickers on Paynter's orchard is between 16 and 70.

He says the Kiwi workers have a different motivation to the RSE workers who are out to earn as much money as they can. They will often work up to 54 hours a week, while on average the Kiwis will do 42. The latter have a tendency to be absent at the weekends and get sicker than the RSE workers.

"The reality is that the New Zealanders don't have the physical capacity and skill sets of young Polynesian men who are athletes in their own right," Paynter explains.

"They are incredibly strong and are unbelieveable physical specimens. There are a couple of Kiwi blokes who can keep pace with them and even out pick them, but that is a minority."

Paynter says RSE workers are very skilled at picking apples with some having done it for 10 years. He says they are absolutely masters of their craft and their hands move faster and their coordination is better.

"They know exactly where they place their ladders and they have got harvesting a tree down a fine art and should not ever be classed as unskilled workers."

Paul Paynter - director of the family-owned Yummy Fruit Company, based in Hawke's Bay - has described the past season as the toughest year in his 30 years in the apple industry. He tells Peter Burke why...

The horticulture and winegrowing sector will have access to an additional 1,600 more workers this season after the Government agreed to increase the Recognised Seasonal Employment Scheme (RSE) cap to 16,000.