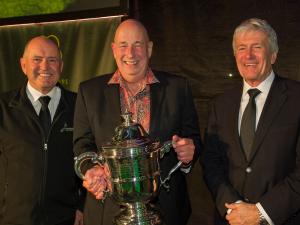 "If you can't have labour, you can't grow. If you can't grow, you cannot comply," Chapman told Hort News. "That is the real nexus and you must have every ingredient in place to make it work."

He says the Government is keen on horticulture growing but the key is getting enough seasonal workers into the country.

Chapman, who stepped down after five years in the role, was honoured at last month's Hort NZ conference in Hamilton with the Bledisloe Cup in recognition of his services to the industry.

He was also honoured by the Chinese Growers Association, Pukekohe, for his services to the group. Chapman says receiving the awards was incredibly humbling and really unexpected.

"You do the best job you can and don't expect any of this recognition other than knowing that you have done a great job," he says. "But the industry recognising that is incredibly special, and the Chinese growers' award, receiving that was unbelievable as well.

"It's a special recognition from a group of growers who are really important and a core part of the industry."

Chapman's career in the horticulture industry has spanned more than 20 years.

Swapping his legal-focused work for kiwifruit, he took up the role of Kiwifruit New Zealand chief executive in 2002 and then in 2005 became NZ Kiwifruit Growers Incorporated chief executive. Ten years later he picked up the reins as Horticulture NZ chief executive, a position he held until June this year.

The Bledisloe Cup for horticulture was first presented in 1931 by the then Governor-General, Lord Bledisloe, for a competition between orchardists for the best exhibit of New Zealand apples at the Imperial Fruit Show.

It is one of several cups Lord Bledisloe presented to New Zealand and is similar to rugby's Bledisloe Cup, which was also donated in 1931.

Despite retiring from HortNZ, Chapman remains involved with the Recognised Seasonal Employer (RSE) scheme. Chapman says the RSE scheme is critical to the sector and he's happy to continue working on behalf of growers.

"I have a track record working with government officials on the scheme."

He was instrumental in the Government's decision in early August to permit RSE workers from Samoa, Tonga and Vanuatu, to enter New Zealand without the need for managed isolation.

Getting the lowdown on soil compaction

While farmers and growers are familiar with ground compaction and soil damage, most attempts to alleviate the problem centres around…

Electric power for the orchard

While the auto industry seems to be galloping into electrification, the agricultural sector seems to be a little more reserved…

Yamaha is made up of two separate companies - Yamaha Corporation, famed for musical and electronic products, and the Yamaha…