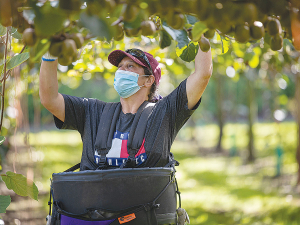 Many kiwifruit growers themselves have been out in the orchards with the picking crews and also helping out in packhouses to help ensure this season's crop gets harvested.

At this point, the Ruby Red variety has all been picked and about a third of the gold crop has also been harvested, with workers now starting to pick the green crop.

NZ Kiwifruit Growers (NZKGI) chief executive Colin Bond told Hort News that everyone in the industry is working together to ensure the crop gets picked this season.

He says many growers themselves have been out in the orchards with the picking crew and also helping out in pack houses. Bond says there have been instances of staff who normally just pick the fruit, doing shifts in the pack houses on wet days when it's not possible to pick fruit.

Bond says these initiatives, along with structural changes being made to the way the fruit is harvested, have given the industry more confidence that the crop will be harvested.

"A couple of other things have also helped. The weather has been quite favourable and it appears that Omicron seems to have peaked ahead of the peak harvest - which is mid-to-late April," he explains. "Those two things have really helped. Back about a month ago, we were very nervous about Omicron and when that was going to hit hardest.

"We were also very nervous about RSEs because there was a Covid outbreak in the Pacific. But now we are seeing these people coming into the country and that is very critical for us because they are part of our night shifts for our pack houses and they are important for our picking crews as well."

Bond says the industry normally has a casual workforce of 24,000 people - in addition to the 10,000 permanent employees - and there were fears that the industry would be short of about 6,000 people. However, he says with the good weather and a combination of factors there is hope that the target of picking 3 million trays a day will be achieved.

Bond says another thing that has helped is the fact that the industry has gained valuable experience working in a Covid environment during the last two years.

"The last two years' experience has definitely helped and it could have been so much worse if Omicron had the numbers we'd been experiencing in March happen in mid-to-late April at the peak of the harvest," he explains.

"It could still happen and that's a risk on the horizon, but what we are seeing now is Covid numbers dissipating by the day."

Colin Bond has some words of caution around media headlines that kiwifruit pickers can earn up to $60 an hour.

He says it's wrong to set an expectation that anyone can earn that sort of money.

"We are saying that pickers can earn $25 to $40 an hour and keep up the quality standards is very realistic," Bond told Hort News.

"If you are going to earn the reported $60 an hour, one needs to be clear on what this might involve.

"We are not saying that everyone who's doing that is going to be damaging the fruit, but you are risking having a negative impact on the qualuty of the fruit if you try and pick that fast, continuously."

He says the kiwifruit industry is based on quality and even a labour crisic can't compromise quality, which is what the Zespri brand is built on.

This is Colin Bond's first harvest as the boss of NZKGI and he's finding the role challenging but rewarding.

He says in times of crisis the industry is at its best. Bond says that's why he wantd to come into the kiwifruit industry, because he saw how it responded to PSA and came through it.

Meanwhile, he says growers are always excited at this time of the year when they see their crops on the vine and have their hopes set on what the season may bring. "It's too early to say yet and you don't count your kiwifruit until they are in a box - there is still a long way to go," Bond told Hort News.

"There is definitely some apprehension, but that is tinged with the excitement of this year. So we are still cautiously optimistic that all the fruit will get picked."

NZKGI chief executive Colin Bond believes the NZ kiwifruit sector has a good proposition to offer employees, with both inside and outdoor work and pay rates that are good relative to the primary sector.