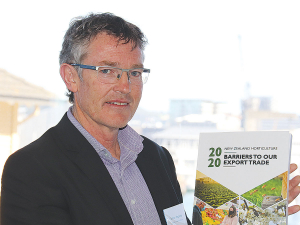 According to the latest statistics from MPI, the EU is the largest overall market for NZ horticulture exports at just over $1 billion. The EU is our biggest market for kiwifruit and the second largest for apples (China is the largest importer of NZ apples).

Horticultural Export Authority (HEA) chief executive Simon Hegarty, whose role is to promote NZ horticultural exports and advocate for the freeing up of market access, says the FTA is fantastic news for the sector.

Hegarty told Hort News that back in 2018, at the start of the FTA negotiations, the HEA made detailed submissions to NZ's trade negotiations setting out the huge cost to the sector of EU tariffs.

"Every two years the HEA produces a large report on barriers to our export trade," he explains. "The EU was clearly the number one destination for us and the biggest overall component of our annual tariff costs."

Hegarty says the EU FTA will see the removal of approximately 60% of the sector's annual tariff costs globally, making it an important deal for NZ hort sector.

He says once the FTA is approved, it will immediately see the tariffs on NZ horticulture's big ticket exports to the EU - such as kiwifruit, onions and apples - removed, meaning savings for those sectors of $37m, $6.5m and $1.3m, respectively. It will also see tariffs on other products - such as frozen boysenberries, apricots, cherries, buttercup and squash removed.

"Well done to the Ministry of Foreign Affairs and Trade whose combined efforts and leadership resulted in this welcome agreement, from what has been a complex negotiation under testing conditions."

Hegarty concedes that gaining concessions for horticultural products in the FTA negotiations was much easier than for the livestock sector.

"This is to keep supplies of healthy food products on supermarket shelves through the full 12 months of the year," he adds.

"So, that's why horticulture products weren't seen as sensitive so much, relative to other food products."

Meanwhile, Hegarty told Hort News that at a time of massive freight disruptions, the deal has become even sweeter for NZ.

This is because the tariffs are set on what is called CIF - cost of the product, plus insurance and freight.

With freight rates skyrocketing, the cost of the tariffs would go up accordingly. However, under the EU FTA this extra cost won't come into play - hence the near $80 million annual saving.

Hegarty adds that the geopolitical situation is adding to the challenges facing horticultural exporters.

"With perishable products we can't afford to have containers sitting on wharves without power supplies or on vessels going to the wrong destinations," he explains.

"It's a high risk and it's been a really hugely difficult two years with all the disruption with freight and shipping."

However, Hegarty says the prospects for the products themselves are excellent so once things returns to some sort of normality he is very positive about the future prospects.

Hegarty believes it was good to get the deal signed now, rather than stalling the negotiations and risking being sent to the back of the queue.