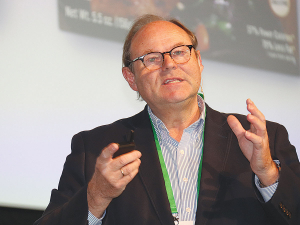 Nestle’s Hans Johr at the conference.

He says the only way to get the consumer to understand about how food is produced is to bring the marketing and brand people to farms and to show them what happens on the land.

He reminded Federated Farmers annual conference last week that most of the world’s consumers live in urban centres far from where food is produced.

So the people responsible for marketing food must understand about agriculture to be able to frame the correct messages to consumers.

He said the true message of agriculture is being lost because the ‘rural/urban gap’ is exploited by activists advising consumers what they should be eating.

And consumers in different countries have different concerns about how food is produced. In the US it’s how farm animals are treated, elsewhere it may be food safety or biodiversity.

Johrs points out that many young consumers, especially in China, use technology in the supermarket to find out about the provenance of food.

“In the supermarket they make a picture of the product that tells them a story about the farmers and products and the emotional benefits. It’s about what the brand offers you.”

Johr’s advice to Kiwis is that we tell the story about NZ and what differentiates it from the rest of the world.

“That has to do with your good dairy farming practices.

“You have to be open and frank about hotspots and tell them you are working on these and have a plan to fix them and communicate that well.”

Having to compete with fake science is a challenge, but we must realise that the consumer’s perception is for them the reality.

Finger-pointing at farmers over environmental issues is unproductive and authorities should work with farmers to overcome problems, Johr says.

“It is clear that farmers do not want to spoil the environment and natural resources. They do not want to jeopardise them, but they do it sometimes because they don’t know better or don’t have the money or  technology to do better.”

Farmers want to be positive stewards of natural resources and “we need to help them do that and not put the squeeze on them”.

Sorting out the problems requires open dialogue with many organisations -- consumers, community groups and farmer groups.