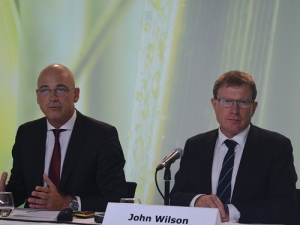 Fonterra chairman John Wilson says he is absolutely confident dairying will recover back to sustainable pricing levels for farmers.

However, he says the recovery is taking longer than everyone anticipated.

The key factor remains the extra milk coming out of Europe. But Wilson told Dairy News that there are signs Europe's milk growth is slowing. Fonterra has been talking to European dairy co-ops and agri analysts, Wilson says.

Over the last two years milk production has ramped up in the EU, backed by higher prices and new investment on farms.

According to Fonterra's latest global update, production in the EU in December increased 5% over the same month the previous year.

The EU has seen growth in milk production in each of the nine months following the removal of quotas on April 1, 2015. Production for the 12 months to December increased 2% compared to the same period the previous year, or an increase of 3.2 billion litres. Over this period Ireland was up 13%, Netherlands 7%, Poland 3% and the UK 2%.

The EU is also pumping most of the extra milk into export markets. EU exports increased 10% in November compared to the same month the previous year. Increases were seen in most of the major dairy categories with only SMP decreasing over the month. Exports have increased 7% for the 12 months to November, largely as a result of fluid and fresh dairy up 15%, whey powder and SMP up 9%, and infant formula up 7%.

But now it is becoming uneconomical for farmers in some regions. Some EU countries are introducing caps on stocking rates to minimise damage to the environment.

"Once we reach a position where demand is greater than supply, prices will improve," Wilson says.

However, he is unable to suggest a timeframe. "We are still confident prices will rise but picking the exact time period is hard."

Wilson says other factors, such as US milk production and geo-political events, are also impacting milk prices.

According to Fonterra's global update, US production in January was in line with the same month last year. While the rate of milk production growth has continued to slow, for the 12 months to January it remains up 1% on the same period last year.

But most US milk is used in the burgeoning local market.