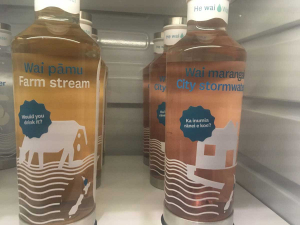 The bottles of water displayed at Te Papa.

It stems from a bottle of murky water on display at the museum: the bottle is labelled “Farm Stream”. An image on the bottle shows a cow defecating in a stream.

National agriculture spokesman Todd Muller earlier this week tweeted a photo captioned “Te Papa water quality display presents this as water from a typical farm stream. What do you think? Any farmers want to post a bottle of water from their farm streams to compare?”

Many farmers took to social media to blast Te Papa, who tweeted in reply to Muller’s tweet: “this display shows that water quality can't be judged on its appearance.

“The dairy stream example is one of 9, and sits right next to a city storm water bottle and below a forestry stream water bottle.”

“The water in their display is not reflective of what your average farm stream in NZ would look like. If you don’t believe me, you just need to look at the countless videos and pictures farmers have posted to social media to correct the perception.

“Farmers were right in demanding to know when and where this water was taken from. Te Papa have since confessed that the water wasn’t actually from a farm at all but was made up in a back room using brown dye.

“It’s not just about the quality of the water in the bottle either” Mackle added.

He says the imagery on the bottle of a cow standing in water defecating is highly deceptive and entirely out of step with the reality of dairy farming in New Zealand today.

Dairy farmers have fenced over 24,744km of waterways.

With milkings typically taking around 17 to 24 hours a week per worker, many farmers have been focusing on milking smarter to reduce hours and creative ways to shorten the working week - like the 22% who report they are using flexible milking.

DairyNZ and NIWA have joined forces to help farms with wetland design and performance.