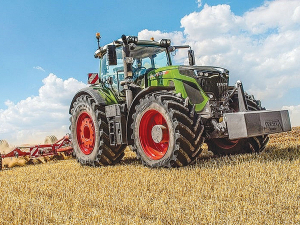 German manufacturer Fendt has released details of its new sixth generation 900 series tractors, which will be a big focus at Agritechnica later in the year.

The group’s own AGCO Power engine was bypassed as it was physically too large for the 900 series.

Maximum engine speed is 1700rpm and maximum torque is available between 1150 and 1400rpm.

The transmission is a TA 300 Vario, and the manufacturer notes that torque is distributed dynamically between the front and rear axles, depending on ground conditions.

The front axle is driven separately, so that during turns the tractor is ‘pulled’ around the turn, resulting in a tighter turning radius while maintaining full traction.

Notably, the tractors will be available with a 60-inch track width to fit row crop work in North America.

Operating weights are 11.3 to 19 tonnes and the tractors have rear linkages which can lift 9.75 tonnes, front linkages capable of 5.6t and a choice of hydraulic pump layouts to deliver a maximum flow of 427L/min.

Up front, the tractors run on a maintenance free, double  wishbone, suspended front axle with 200mm of travel.

The operator gets an air suspended seat in the air suspended cabin, with a 10.4 inch full colour VarioTerminal for machine control.

The tractors can be optioned with Fendt Connect – a telemetry system for machine management.

And ProfiPlus models are fitted as standard with Smart Connect, allowing access via iPad and the tractor’s in-built wi-fi system to data such as position, area worked, speed, fuel use and engine loading.

Options include a new locking system which uses a tractor-specific coded key for access to the cabin, ignition lock, hood and fuel locking cap.

The 900 series can be specified with the company’s VarioGrip tyre pressure regulation system, said to give up to 15% better traction and ideal for a new 750/70 R44 tyre option designed for the series.