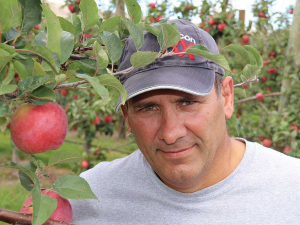 Most of the apples grown on Dean Nikora’s orchard are destined for markets in South East Asia, including China.

Dean Nikora is a successful dairy farmer and former winner of the prestigious Ahuwhenua Award for the top Maori dairy farmer of the year.

He's now the chief judge in this year's competition and a highly respected business person. Fast forward 13 years and Nikora is showing that he's an all-rounder when it comes to the ag sector. Peter Burke recently caught up with him and his latest horticultural venture in Hawke's Bay.

Dean Nikora left school at 16 and immediately embarked on a career in the dairy industry - working his way from worker, sharemilker and then farm owner.

Over time, he's run a consultancy business and travel agency out of Singapore. He also has investments in orchards, farm management and commercial property.

In 2018, Nikora and his partner decided to permanently relocate back to NZ and quite by chance they ended up buying an apple orchard at Pukahu, south of Hastings. He says it was cheaper to buy an orchard than a house in Havelock North.

"It wasn't an overly productive orchard. Essentially we came back from overseas and we wanted a home and the home had an orchard attached to it," Nikora told Hort News. "It gave us a place to live and develop opportunities on a nice, square block five minutes from town.

"We never intended to go to horticulture - we did have slight interest in it. But, in the end, we saw an exciting opportunity to make the orchard and we have."

Nikora says the orchard had been run down and suffered from disease, such as fire blight - a destructive bacterial disease. He says there were also blocks of trees in the orchard that weren't making any money and they replaced these poorer varieties of apples with better ones.

He says they are now selecting another variety which they will plant next year. It seems the house was also pretty terrible.

"It wasn't habitable and we lived in a horse truck for 3-4 months till we got that sorted. The windows were broken and in order to run our businesses we put two shipping containers on the property and used them till we got the house in order," Nikora told Hort News.

"We then set up the irrigation systems for the orchard and got some good management in place using Freshmax."

The land at Pukahu is regarded as fringe land for apple growing because of the soil type and climate, especially the risk of frost. He says this made for extra challenges and they employed farm consultants Ag First to help them develop the block. This included farm walks every month.

"For two years, we basically educated ourselves," he says.

Freshmax plays an important role in the management of the Nikora's orchard, headed by Amrinda Singh who's managed orchards like this for the past 11 years. It's Freshmax who employ the RSE workers to pick the apples and who takes care of the marketing of the crop.

Nikora is a detail person and is very focused on profit and excellence - and this is paying off.

Most of the apples grown on Nikora's orchard are destined for markets in South East Asia, including China. He says they are also adding varieties that will be suitable for the European market.

A labour of love becoming a major issue for orchardists

The other issue confronting orchardists is the lack of people to pick the fruit.

Nikora says he’s lucky having Freshmax to source labour, but he’s taking no chances in the future.

He’s already bought what are known as Hydraladas – mobile, hydraulically-operated platforms. These can accommodate four fruit pickers and are driven down the rows of apples. The height can be adjusted to pick both the top of the trees and also fruit lower down.

“This innovation will probably allow us to reduce our labour demand by about 30%. For us it will also open up a new labour market – namely local people,” Nikora told Hort News.

“We will no longer need such physically strong people to move ladders around and climb up and down them with large bags of apples, because with the mobile picking platforms these can easily be fed into bins from the mobile trestles. So, it takes the ladders out of the system and makes it easy for us to take the fruit from the top of the trees, where there is low volume but higher value fruit,” he explains.

Also, on Nikora’s mind is the issue of sustainability and what it means to him and his business – as well as the consumer. Something he has seen at first hand.

“We hear about the Chinese mum who is the key buying decision maker in the house and the young people who are not necessarily eating meat in the way we think they should and choices they are making,” he says.

“When you live in that market, you see it and it’s real. I guess we are starting to ask the question, how do we apply ourselves here to meet that market?

“At present, we are just focused on being profitable and this will be the first year we have made a profit. Our goal is to get the right varieties of apples planted and the work from there,” he says.

In his 52 years, Nikora has had quite a journey and successful one at that. His philosophy is one of constant improvement, attention to detail and learning from the past.

Winning the prestigious Ahuwhenua Trophy was a part of that journey. For him, the learnings have sharpened his thinking and open up a new world of important contacts.

He told Hort News this translates into having clear strategies, management plans and systems and having good people around him.