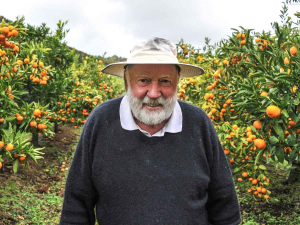 His death follows a period of ill health.

T&G says that throughout his tenure, the company grew from a domestic fruit and vegetable seller into a significant player in the international fresh produce industry, introducing new fruit varieties to the world – including Envy and JAZZ apples.

Gibbs was an early and prominent proponent of ending the single-desk export monopolies in both the apple and kiwifruit businesses,

Chief executive Gareth Edgecombe says T&G is grateful to Gibbs and his family for their passion, commitment and lifelong relationship.

“Under Tony’s leadership and strategic direction, T&G reshaped its business to focus on its core strength of fresh produce and expanded its global footprint.” Gibbs was also a long-time mandarin orchardist based at Matakana, Northland.

The 72-year-old had a long history in business in NZ. Gibbs was probably best known as an executive director of GPG and was also actively involved with several of New Zealand’s biggest companies, including Vector, Tower, Wrightson, and Turners & Growers.

In 2009, Gibbs was awarded a Companion of the New Zealand Order of Merit for services to business.