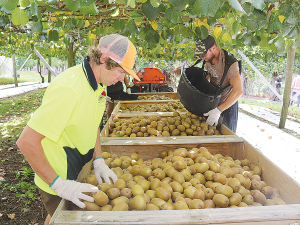 The kiwifruit industry is incentivising growers to produce fruit earlier in the season in a bid to spread the workload over as longer timeframe as possible.

The labour crisis, while not confined to horticulture, is leading to changes in production systems, to avoid situations where it becomes difficult to harvest a crop. Covid is a huge factor as is the lack of migrant labour, be it backpackers or RSE workers or the lack of available Kiwis to harvest fruit.

MPI says, in the past season, the spread of Omicron coincided with the peak of the apple picking season. Hort News is aware that on some orchards up to 20% of the fruit was not picked.

The SOPI report suggests that the end to the present problems is in sight: that growers are likely to consolidate their future plantings to the most profitable orchard blocks and varieties to mitigate production costs. But the report goes on to say that increased plantings will continue, albeit at a slower pace than previously forecast.

To combat the same problems - and especially the larger volume crops - the kiwifruit industry is incentivising growers to produce fruit earlier in the season in a bid to spread the workload over as longer timeframe as possible. This is designed to ensure there is continuity of fruit on northern hemisphere shelves and reduce late-season fruit quality issues.

The overall good news for horticulture is that the sector is maintaining a steady year-on-year growth pattern and is not suffering from the wild positive and negative swings like sheep, beef and dairy. Total horticultural exports, to the end of June 2022, are forecast to be $6.7 billion - up 2% on last year.

Further good news is that this growth will continue, with hort exports reaching $8.1 billion by 2026. Kiwifruit will jump from $2.8 billion this year to $3.5 billion in 2026, with apples and pear exports rising from the present $900 million to $1.1 billion over the next four years.

The apple crop for 2022 is expected to be down on last season - due mainly to dull wet weather, which saw climatic conditions sub-optimal for pollination, fruit set and early growth.

This was especially so in Hawke's Bay. MPI says marketing prospects for the 2022 crop are mixed with good demand in Asia, but uncertainty in northern Europe. It says the expansion of markets in Asia as well as diversification in new varieties is better aligned with consumer demand.

As regards kiwifruit, the report notes the shift from Green to Gold and the ongoing expansion of this trend. It notes that kiwifruit now make up 59% of all NZ's horticultural exports at $2.8 billion. This figure is expected to rise to nearly $3.6 billion by 2026.

The SOPI report highlights the ongoing demand for new licenses for both Gold and Ruby Red kiwifruit, with these varieties reaching record prices. The only slight negative, says MPI, is that due to a mix or Covid-related problems, orchard gate returns will fall slightly.

The picture for avocados is quite mixed, with export revenue for the fruit down by 61% to $79.2 million. This was, in part, due to the collapse of the Australian market - which was flooded with local supply due to issues around shipping.

The report highlights some upcoming challenges for the sector, including competition in Asian markets from South America and the fact that the NZ's wet climate puts pressure on production. On the positive side, MPI says the avocado sector has succeeded in its strategic goal of reducing its reliance on the Australian market.

It was a good year for cherries. The export season was the second best on record, with the export price rising 10.8% to $24 per kg. The outlook, says MPI, is good with increasing production being met by increased demand in Asia.

Finally, it hasn't been the best season for vegetables with a multitude of challenges - ranging from adverse weather events to the scaling down of the restaurant trade due to Covid. Some asparagus growers were focused to leave their crops in the ground, while in the Horowhenua district's leafy green crops were damaged by hail and rain.

The report says growers are likely to carefully consider planting programmes in the future - as fuel and fertiliser prices rise. Overall, the export returns from fresh and processed vegetables for 2022 is down slightly on the previous year, but export returns are expected to pick up over the next four years.