Eye out for stink bugs 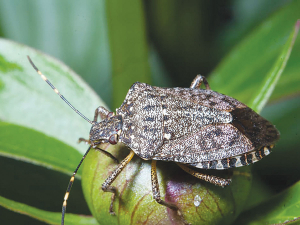 A winter campaign is underway to help raise awareness of the brown marmorated stink bug (BMSB).

"There is always the chance the unwanted pest could arrive in parcels and with other imported items. We very much want the public to help us with our surveillance efforts."

Biosecurity NZ's BMSB winter campaign focuses on showing people how to correctly identify the pest and report it. While it looks like some other bug species, BMSB has elements that make it identifiable - including white stripes or banding on its antennae and abdomen. The bug is about the same size as a 10 cent coin.

The winter campaign follows the spring-summer campaign of 2021/22 which saw stink bug ads appear on people's phone and computer screens.

Duthie says Biosecurity New Zealand is asking anyone who thinks they've found BMSB to catch it, snap it (take a photo), and report it.

Biosecurity NZ says there is currently no evidence of any established BMSB population in New Zealand.

There were 61 live bugs intercepted in New Zealand during the 2021/22 season - mostly associated with imported cargo.

Duthie says the number of live interceptions has dropped considerably over the last three years.

"This is largely due to the introduction of import rules that makes it harder for BMSB to enter New Zealand on risky cargo such as vehicles, machinery and parts from countries with established stink bug populations. Such cargo must be treated before arriving in New Zealand during the BMSB season."

"The fact we have no established BSMB populations suggests that the current biosecurity approach is working well," Duthie adds. "However, the risk of an incursion is never zero, which is why we all must play our part in keeping an eye out."

What's The Threat To NZ?

The brown marmorated stink bug (BMSB) is an agricultural, horticultural, and social pest.

It's native to Asia and has spread throughout North America and Europe. The bug isn't established in New Zealand, but the sneaky pest hitchhikes on passengers and imported goods. However, they have been caught at our border many times.

BMSB feeds on more than 300 plant species. If established in New Zealand it could decimate fruit and vegetable industries.

During autumn and winter, thousands of bugs can enter houses to shelter from the cold. When they're disturbed they release a foul-smelling liquid, which can make the house hard to live in.

Adult BMSB are a brown 'shield' shape and about the size of a 10 cent coin.

The easiest way to identify them is from the white bands on their antennae and alternating black and white markings on the abdomen. Its underside is a white/tan colour.

Stink bug eggs are light green shaped like barrels, and are usually in clusters of 20 to 30.

Biosecurity Minister Damien O’Connor is warning travelling Kiwis to be vigilant as the high-season for the crop-eating brown marmorated stink bug (BMSB) is under way.

Biosecurity New Zealand has directed a vehicle carrier to leave New Zealand waters following the discovery of stink bugs and other regulated pests.

Bugs cause a stink

The Ministry for Primary Industries is taking new measures to reduce the risk of brown marmorated stink bugs entering NZ via vehicles and machinery imported from Japan.