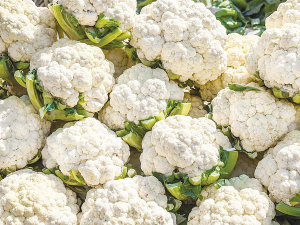 Cauliflower is the current ‘it’ vegetable in many diets.

The average Kiwi pantry and dinner table will evolve in the new decade with a focus on fresh, fast, fit and fair, says United Fresh.

New Zealand’s only pan-produce industry organisation has broken down the top fresh produce trends from around the world and forecasts a bumper year for fruit and veg consumption.

Despite the ongoing narrative about the rise of plant-based protein as a solution to climate change, studies show only 6-7% of Kiwis identify as vegetarian or vegan, the United Fresh report says.

As a nation of devout meat-eaters how will the rise of vegan meat replacements impact our daily habits?

Meat is still important and will still represent an economical source of protein. Studies show that consumers are willing to delve into both plant-based protein and traditional meats with 98% of alternative meat buyers not only buying traditional meats but spending more to purchase higher quality cuts in the process.

And while many of us will maintain our current meat consumption, expect vegetables to be more than just a supporting act, increasingly forming the central focus of the meal rather than just a side dish.

Customers don’t want to travel far for quality fresh produce and a good range of specialty groceries. Convenience is key, and more products will be available at petrol stations and grocery stores that are not only easy to eat on-the-go, but are also healthy and fresh.

Ready-meal solutions are a huge driver of the NZ consumer.

Supermarkets have taken their lead from delivery services with a huge range of pre-cooked foods on offer. Expect to see more pre-prepared vegetable offerings as well with products such as ‘zoodles’. Millennials are the ‘want it now’ generation, feeding the popularity of services such as Uber Eats. Takeaway spending will continue to grow faster than supermarket spending.

The ketogenic, or “keto,” diet has seen a surge in popularity as more people turn towards the low-carb way of eating. According to some studies, the global ketogenic diet food market is projected to grow by 5.3% over the next five years.

Consumers on the keto bandwagon are seeking out lower carb ingredients and are fuelling a flurry of new flours.

Riding the wave of low-carb diets, the humble cauliflower has become the new ‘it vegetable’. While many home-cooks are content to make their own cauli-concoctions, expect to see a significant rise in cauliflower-based products such as gnocchi, rice and pizza bases taking over the supermarket aisles.

We’re often urged to ‘eat a rainbow’ of fruit and vegetables.

Red kiwifruit have already been signalled as a tasty, exciting addition to our fruit bowls but we can also expect a new wave of sprouts, leaves, and other greens and an increase in the popularity of spirulina and butterfly pea, which is a dramatic blue.

Trend forecasters are picking West Africa as the newest source of exciting flavours to tempt taste buds with its cuisine a melting pot of Middle Eastern and Mediterranean influences. Think tomatoes, onions and chilli peppers mixed with peanuts, ginger and lemongrass.

The region is also a source of new superfoods like moringa and tamarind, and lesser-known cereal grains sorghum, teff and millet.

Expect more exotic treatments of kiwi favourites like kumara transformed into the key ingredient of a West African peanut stew.

Customers want to have trust in their supplier of fresh food. They love to know that the mandarins in their local supermarket came from Kerikeri or Gisborne and that they are part of a seasonal programme. They want to know that the grower of their carrots is a family business stretching back for 50 years.

Smart grocery operators will utilise social media channels to connect on a personal basis with their communities, introducing the outside world to their staff and systems. Grower organisations will also reach out to an audience increasingly concerned with the provenance and traceability of what goes on their plates.