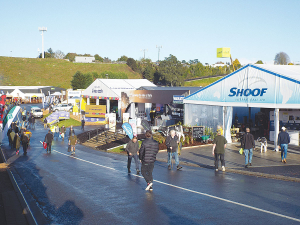 The National Fieldays returned to Mystery Creek last week after a lapse of two years.

In March, BNZ revealed it was offering a loan discount to dairy investor Southern Pastures, if the company meets water and bio diversity targets on its farm. The New Zealand first $50m sustainability-linked loan isa pilot, but BNZ says it will roll it out more widely if successful.

ASB says it will loan for conservation and biodiversity restoration, and projects to drive the switch to renewable energy, prevent pollution and waste, cut emissions, as well as promote healthy soil, ecosystems, waterways and animal welfare.

“Farmers tell us climate change and regulatory pressure are big issues keeping them up at night. That’s why we’re digging in and doing more for those who want to go beyond compliance basics and drive change that makes a deeper difference for their farm and ultimately the environment,” Deane says.

He adds that the bank’s farming customers have already invested more than $120 million to plant native trees, install environmentally-friendly effluent systems and fence off waterways.

“Our goal is for our new sustainability loans to back $100 million in green upgrades over the next five years, so New Zealand can continue to lead the world in efficient and profitable farming and command a premium for Kiwi products.”

Deane says applications for loans are now open and the variable rate will be available for up to five years from when the customer makes their first draw down.

Many agricultural loans will now be guided by sustainability considerations including climate change mitigation and adaptation, water use, waste minimisation, labour rights and animal welfare.

"Content without being confident" is how ASB rural general manager Ben Speedy described the mood among dairy farmers at this month's National Fieldays.