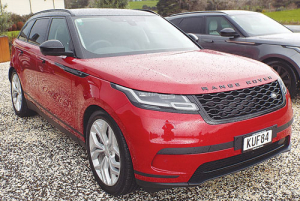 Interestingly, the name Velar pre-dates that of Range Rover and was initially used on 26 pre-production vehicles of the well-known brand back in 1969-70. Meaning ‘to guard’ in Spanish and ‘to veil’ in Italian, the name was used to spoil the scent of the paparazzi of the day while the prototypes were tested around the world.

Some 47 years later – and with a mountain of heritage behind it – the Velar of 2017 enters a market for high-end SUV’s that sees it competing against familiar models like BMW X5, Audi Q7 and the Porsche Macan.

“The Velar is the most road-focussed member of the Range Rover family to date,” says Jaguar Land Rover, NZ product manager Michael Jones.

It fits in between the smaller Evoque and the larger Range Rover Sport. Target aspirations are that it will rack up about 150 sales per annum in the busy NZ market.

The tale of the tape shows the Velar is about 50mm shorter than the Sport, narrower and sleeker, runs constant 4WD and has no low-range transfer case. Using a mix of electronics that power the terrain response system, an eight-speed transmission, active differentials and a constantly adjustable air suspension, the Velar is extremely capable in everything from school playing fields to the water-sodden forests of the Kaipara.

During a quick blast around north Auckland followed by a trek through the Woodhill Forest, journalists commented on its ability on the road and its unstoppable ability when the bitumen was left behind.

Smooth fluid looks, complemented by design detail like flush-fitting door handles that pop up for use, are carried further with the use of LED lighting to the front and rear, and animated directional indicators on each corner.

A choice of Velar or Velar Dynamic-R body styles sees the latter taking bumper accents, bonnet and side vents, and lots of satin chrome detailing. Three specification levels -- S, SE or HSE -- allow customers to choose a vehicle that suits their needs and optimise it extensively.

In the cabin, two 10-inch touch screens offer intuitive control of all the vehicle systems, while the futuristic dashboard also carries must-haves such as an embedded SIM, 4G Wi-Fi and a clever activity key for remote control functions.

Current engine choice is a V6, 3L item in diesel or petrol: the former, the D300, uses twin-turbos to deliver 221kW, while the petrol P380 takes the supercharger route to make 280kW.

On the drive circuit, the petrol performed akin to a hot hatch, covering the ground quickly without giving any indication of its 1900kg mass. The twin turbo oil burner was not so swift of foot, but still made a 0-100km/h dash in only 6.5 secs.

Ride quality was comfortable in all situations, showing the technology of the suspension dynamics, which also served to eliminate any body roll even when thrown into tightening bends.

At the rear end, maximum volume is quoted at 1730L and this is easily accessed by the easy loading function that allows the vehicle to squat on it air suspension, and the gesture-controlled electric tailgate function.

THE FOURTH generation Range Rover is touted as the most capable and luxurious Land Rover yet.  Lighter, stronger and with new levels of refinement, it presents as the world’s finest luxury SUV, says global brand director John Edwards.