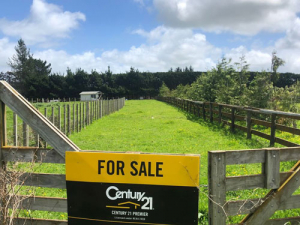 Taranaki seems to be bucking the trend in sales of dairy farms nationwide, and it may be due to sharemilkers.

Real estate agent Peter McDonald says in the past dairy farms put up for sale were usually snapped up by the dairy farmer next door. But in the last year or so this hasn’t happened. Instead the farms are selling to sharemilkers buying their first farm.

Taranaki dairy farms’ average smaller size partly explains this, says McDonald. A Taranaki farm may sell for $2.6 million to $2.8m, whereas a bigger farm elsewhere may cost $7m or more.

“Taranaki has traditionally had a lot of smaller farms of 60 - 80ha – more affordable and not so much borrowing.

“The sharemilkers who bought such farms had been on properties with up to 600 cows and they built up some equity, sold some cows and financed themselves into these farms. And the banks have also come to the party in most cases.”

“In some cases vendors have left money in the farm,” says McDonald. Many years ago it was not uncommon for vendors to leave money in their farms. Now there is hint that this is coming back and many farmers are leaving the industry.

Farmers spoken to by Dairy News say that if their sons or daughters decline to keep farming they (the owners) prefer to retire to nearby towns where they already own property. Some farmers don’t want another sharemilker on their farm and just want out of the business.

Also, older dairy and sheep and beef farmers must face increasing legislation and paperwork. Farmers like to farm, but new and pending compliance issues are too much for many and leaving the industry gets them out of this.

A floating and volatile situation – that’s how the Real Estate Institute of NZ rural spokesperson Brian Peacocke describes the current value of dairy farms around the country.