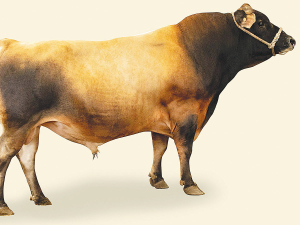 Bruce and Margaret Sim are leaving an impressive legacy in the national herd by again winning the Jersey NZ JT Thwaites Sire of the Season award. It is the first time in the history of Jersey NZ that a breeder has won the prestigous title two years in a row.

The Sim's winning sire for 2021 is Glen Leith Quigley ET S2J and follows on from their 2020 winner Glen Leith and Quiz S2J.

The Sims retired from dairy farming this year, leasing out their 54-hectare Okato farm and selling their herd to dairy farmers around New Zealand. However, the couple's Jersey breeding legacy will continue with many of the herd sold with contract mating agreements in place with breeding companies, including CRV.

The Sims also have a further two Jersey bulls, bred through CRV, yet to make their mark.

"We're really pleased to have won the award twice, but we also still have two more bulls from the same cow family that are also going through the sire proving scheme with CRV. So, we're hoping that Quigley won't be the last winner," Bruce says.

The winning sires descend from the successful 'Qla'cow family. The two additional sires, being marketed by CRV this season as genomic InSires, are Glen Leith OL Quinella and Glen Leith Triple Quartet. These bulls are still awaiting their daughter proofs to see if they too will become proven sires like Quigley and Quiz.

"My father and grandfather were all involved in breeding, so it is in our blood," Bruce explains. "We found a newspaper clipping showing that my grandfather sold a bull at the Okato bull fair in 1924, nearly 100 years ago."

CRV sire analyst Jenna O'Sullivan says it is a pleasure working with the Sims "These awards are recognition of the quality of their herd. To win one JT Thwaites Sire of the Season is impressive, but to take it out two years in a row is outstanding. CRV is delighted to work alongside them in delivering these top sires to the New Zealand dairy market."

O'Sullivan says these sires are an excellent example of the standard the company is setting. She adds that with strong CRV Health and CRV Efficiency scores can be certain to breed cows that will become top performers in the herd in the future.

Jersey New Zealand genetics convenor Steve Ireland says for the Sims to win the award two years in a row is an amazing result.

The award measures he genetic merit of all four-year-old Jersey bulls with first lactation two-year-old daughters. Ireland says sires had to meet a series of rigorous standards, which involved assessing their daughters milking in the national herd.

The award also recognises sires who have the potential to significantly influence the quality of cows within dairy herds across New Zealand.

The sale of a line of elite, high BW, young Jersey cows and heifers is attracting interest from farmers across the country.