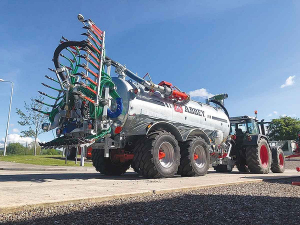 As an example of the latest technology to deal with a by-product once seen as just a nuisance, you don’t have to look much further than the Abbey Machinery 3500 recess tandem tanker.

This system is also fitted with a NIR sensor to identify the quantity of nitrogen, ammonia nitrogen, phosphorous, potassium and dry matter nutrients applied to any given hectare.

The 7.5m Tri-App Trailing Shoe on the tanker is application rate controlled, using ISOBUS compatibility for added convenience for operators. By using an ISOBUS solution, the distributor head can be sequenced electronically to operate within a group of functions. The boom arms will lower, the gate valves will open, and the distributor will switch on in a timed sequence.

Also, if the distributor senses an over pressure situation, a signal is sent via ISOBUS to instruct the distributor head to reverse over several cycles to free any potential blockage.

If the blockage can’t be freed in this way, the operator is warned on the screen in the tractor to stop spreading and seek a remedy.

Dependent on specification, tankers can be fitted with a water-cooled vacuum pump, featuring ballast ports, a complete water jacket around the normal rotor assembly and a filtering system to the traps on the tanker. This allows operation over extended periods of time without over-heating and prolongs the service life of the pump assembly.

A long reach bi-directional filling arm at the front of the tanker can operate to the left or right-hand side, offering convenience in differing locations, while also featuring turbo assistance for ease of filling and full loads.

The science of effluent

Grass growth is dependent on nutrients such as nitrogen, phosphorus, potassium and sulphur, then getting those nutrients into the plants’ root zones to maximise foliar growth – while also minimising environmental losses.

For those running operations with access to farm effluent, commonly known as slurry, the quality of those slurries is affected by animal type, their diet and the animal’s feed efficiency, with ruminants typically only utilising 15-20% of what they eat.

The application timing of effluent impacts directly how much of the nutrients get to the root zone quickly to enhance crop performance. For example, hot conditions at the time of application can result in significant ammonia losses, slurry caking on the ground and poor overall response.

After seven days, the paddock was analysed and revealed that the splash plate applied area still had foliar contamination of slurry, whereas the other two application methods had virtually no foliar contamination, with the Abbey Vertical Trailing Shoe performing best.

The trials showed there was 90% retention of nitrogen in the Vertical Trailing Shoe area, resulting in 90% more grass than the Splash Plate area – a win-win situation for the farmer and the environment.