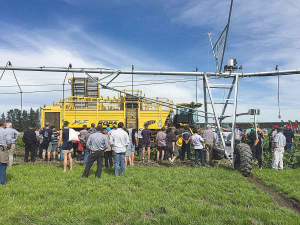 NZ and Ireland both share an innovative approach to farming and agritech.

While it may sound like a cliché to say that Ireland and New Zealand both punch above their weights, it’s clear from the figures that it’s true.

Ireland, a country of less than 5 million people produces enough food to feed over 50 million people, while NZ’s agri-food is known across the world for its food – with its dairy farming passing $15b in export earnings annually.

Both countries are united by their shared commitment to quality, traceability and the highest standards in production and safety.

So, the question arises: “How do we increase production to meet the world’s growing population and changing diets, while at the same time reducing costs and maintaining profitability?”

The answer will undoubtedly come from the agritech sector and a new generation of precision machinery.

Irish agriculture competes with the absolute best internationally, thanks to incredibly low rates of antibiotic usage, no hormone usage, high standards of animal welfare, and full traceability from fork to farm. Irish agritech and agri-engineering exports are now worth €250m annually to the Irish economy.

Ireland has long been home to the world’s tech giants, housing names such as Google, Facebook, Twitter, Intel and Microsoft. The top 10 global pharmaceutical companies are also based in Ireland and cumulatively the pharmaceutical, biotechnology, medical devices and diagnostics industries employ over 30,000 people – offering Ireland unique access to talent and knowledge in digital technology and life-sciences that can be seen in our agritech base.

Companies such as MooCall have harnessed the latest technology to produce a range of calving sensors and heat detection collars. MagGrow offers spraying technology that helps farmers grow more by using less, with a system that gives better coverage than conventional crop spraying systems and reduces spray drift by up to 70%, benefitting both farmers and the environment.

Irish companies like Abbey, McHale Major and Hi-Spec are already world leaders in the specialised machinery, such as mixer wagons for feeding cattle, high-quality baling and wrapping systems, slurry spreaders, agricultural trailers, and grain handling equipment. Many of these are making a difference to NZ agriculture.

Looking at collaboration in the other direction, Ireland welcomed a NZ Agritech delegation to the National Ploughing Championships in Co. Carlow, Ireland. The mission undertaken by Callaghan Innovation, in partnership with Agritech NZ and NZTE, were given an insight into Ireland and the UK’s agricultural industries. Throughout the visit, the delegation met with Irish counterparts, many of which showcased the latest in Irish agritech solutions at the Enterprise Ireland Innovation Arena, forming new commercial bonds with Irish companies.

In a similar vein, NZ Trade and Enterprise established a hub at “The Ploughing” to showcase some of the Kiwi firms already making an impact in Ireland.

This is helping to drive the innovation agenda that is crucial to both countries and has the potential to increase the resilience, productivity, and profitability of farming across both regions.

While many contractors still use trucks for haulage duties, the last decade, with the advent of larger tractors, has seen a great deal of interest in the use of high volume, high-spec tipping trailers.