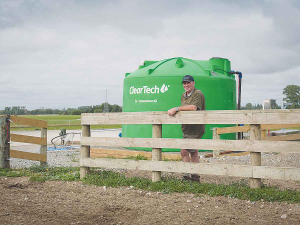 Ravensdown’s ClearTech system uses a coagulant to bind colloidal particles together to settle them out from the water.

Thorneycroft, an 800-cow property near Geraldine, borders the water collection zone for the township. It was while working with Ravensdown Environmental to renew his farm consents that Neil says the idea of installing a ClearTech unit came about.

“The science was a plus with the information we were putting together with our consents to farm, which is why we pursued the ClearTech system for that particular farm,” he says.

Developed in conjunction with Lincoln University, Ravensdown’s ClearTech system uses a coagulant to bind colloidal particles together to settle them out from the water. This clarifying process reduces the environmental and safety risks linked with farm dairy effluent (FDE). It kills 99% of E. coli bacteria in the clarified water and reduces the risk of phosphorus leaching in the FDE applied to pasture.

Stripping out the E. coli and other bacteria in FDE means freshwater use is reduced, while effluent storage capability is increased. The clarified water is used to wash down the dairy yard and irrigated back onto paddocks.

By reducing the amount of FDE by around two-thirds, ClearTech offers Neil a proactive solution to the environmental issue of spreading effluent to pasture near the township.

“The less material we have to spread with that, the less labour is required,” he notes.

Neil’s seen firsthand how much easier it has made things for the staff on Thorneycroft, and his advice for anyone thinking about ClearTech is to ‘go for it’.

“There are so many positives with it and the science is all there behind it.”