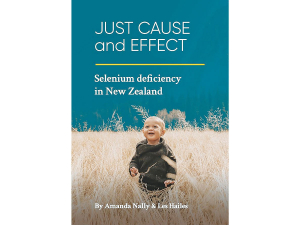 The book became Les Hailes life work, right up until his death.

Deeply suspicious of academia, the Balfour farmers instructed the school to encourage their son's interest in more practical pursuits.

When Hailes returned to the family farm it was as a practical young man, who not only absorbed knowledge like a sponge but could also apply it.

Little surprise then that he was an early adopter. Having bought his own farm Woodlaw in Western Southland, Hailes began adding selenium to drench as soon as vets recommended it in 1958. Three years later he diversified into wheat farming - an unintended consequence of which was to strip more selenium from the human diet.

However, in a clear example of a mineral is not in the soil, it can't be in the food; a 1991 comparison showed North American grown wheat had 470mcg of selenium per kilogram, Australian 140mcg while New Zealand wheat averaged 12.5mcg per kilogram.

While sheep became healthier, New Zealanders got sicker, with Southlanders the sickest of all. When Hailes' attempts to get academics to take him seriously failed, he hired me.

I suggested that rather than authoring a paper for academia, we instead write a book for every reader.

It became Les Hailes life work riht up until his death, aged 89, in October 2020. He is survived by his daughter Angela, and this book Just Cause and Effect: Selenium Deficiency in New Zealand.

To claim selenium as a panacea for all illness would be simplistic and we don't. Every chapter is supported by strong, documented international research on the importance of selenium to the human immune system our fertility, our resilience, and brain development  - to good health.

For a mostly chronological flow of how selenium is distorting out world, the book can be read from chapters one to 15. But each chapter has been written as a stand-alone.

Ill Thrift is an old veterinary diagnosis applied to animals that should have been thriving but weren't. A puzzling "something's wrong but we can't quite put our finger on it". A diagnosis, as Les Hailes says, is totally applicable for our country - and really, it's the premise for the book.

Avian Nation is a short history of New Zealand geography from 120 million years ago which looks at how our selenium- deficient land was formed and examines why that shaped a unique flora and fauna – one in which mammals were conspicuously absent.

When the Green Revolution reached New Zealand shores in 1960, record wheat yields grown from Southland were so selenium deficient the effect on human health was immediate.

Cot death rose to epidemic proportions, before ebbing, in a rhythm that marched closely to the twin drums of New Zealand soil maps, and its wheat industry.

The book focuses on diseases where New Zealand bucks the OECD average; asthma, depression and its ugly sibling suicide, obesity, cancer, and heart disease where a particular form, cardiomyopathy, has been linked to low selenium.

It also looks more generally at viruses that thrive when immune systems are weak, fertility, life expectancy, and the world-wide phenomenon of dropping IQs alongside the world’s largest longitudinal study – which gives a peek at the cumulative effects of a low selenium population as it ages.

And we look at selenium itself. Where did it come from, where is it found and how much do we need?

Just Cause and Effect Selenium Deficiency in New Zealand has sold more than 400 copies and is available in public libraries throughout New Zealand.