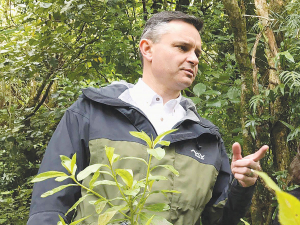 OPINION: Climate Change Minister James Shaw should gainfully spend his time in MIQ - following his attendance at the recent COP26 in Glasgow - getting his head around how to better promote NZ's world leading split gas approach.

He does not have to look too far for advice and guidance on the topic. Both Beef+Lamb NZ and DairyNZ have all the research and information that he needs.

A split gas approach highlights the difference between short and long-lived gases and their individual impact on warming. This approach takes into consideration the different durations of greenhouse gases in the atmosphere, and their relative potency, to provide a more accurate and more easily understood picture of the complexities of the subject.

As a greenhouse gas, methane is 28 times more potent on a per kilogram basis than carbon dioxide. However, methane also has a far shorter half-life of 9-12 years versus 100-120 for CO2. This means short term reductions in methane emissions will have a faster long-term reduction in overall warming effect - so long as methane emission remains neutral, or reductions outstrip the rate at which it is added to the atmosphere.

Agriculture's methane emissions have stabilised in New Zealand, so they are not causing additional global warming. That means any reductions in our agricultural methane levels will not only needlessly handicap NZ's economy but also contribute to less warming.

Minister Shaw also needs to do more in dispelling the myth - promulgated by the likes of Greenpeace and other fanatics - that the Government is 'letting agriculture off the hook' in regard to climate emissions. The reality is that agriculture is the only sector in NZ with a proper emissions plan - the ridiculously named He Waka Eke Noa. This partnership made up of the primary sector, government and iwi, actually includes metrics which reduce ag emissions, not just 'mitigate' them by planting trees as other sectors are doing.

Critics also conveniently forget that NZ's sheep and beef sector has reduced its absolute emissions by more than 30% since 1990, while total methane emissions from all agriculture have been stable for the last decade.

Shaw missed a trick by not strongly advocating for split gas and an advanced metric like GWP* at Glasgow. Now he has a chance to rectify this for the betterment of both NZ and the planet.

What COP26 means for co-op

Fonterra's Amsterdam-based trade strategy and stakeholder affairs manager, Mark Casey, recently attended COP26 - the annual United Nations Convention on Climate in Glasgow. Here are his thoughts on this globally significant event and what it means for the Co-op.

OPINION: So the 'COP26' climate talkfest in Glasgow got off to a strong start by declaring yet another 'climate emergency', starting as they meant to go on - by blowing hot air. Empty pledges, and attacks on farmers, followed.