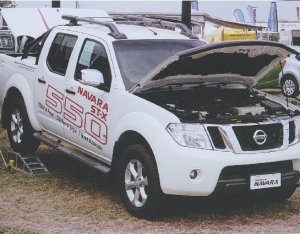 When it first arrived in 2005, the Nissan Navara ST-X set a new benchmark for utes.

It was bigger inside, gruntier and provided a more car-like driving experience than other utes.

In 2010 it maintained its lead with a useful performance and specification upgrade, lifting the torque of the excellent 2.5L diesel from 403Nm to 450Nm.

The new offering from Ford/Mazda has eclipsed the Navara in some regards, particularly in ride comfort and steering response, and its 5-cylinder diesel is slightly more powerful than the 4-cylinder of the ST-X 450. However, with the much-anticipated New Zealand launch of the big thumper, the V6 turbo-diesel STX-550, Nissan comfortably retains its title as most powerful.

As the name suggests, the 550 produces 550Nm of torque (@1750rpm) and with 170kW of power (@3750rpm) is the undisputed heavyweight champion. All the good things about the Navara are still there – excellent ride, handling, space, specification, towing capacity (3000kg braked) – and the V6 adds to the appeal.

Our review vehicle had fewer than 1000km on the clock and the engine was still tight, but the grunt was there in spades and will only improve as more miles break the engine in. On paper, the V6 is a couple of seconds quicker from 0-100km/h than the 450 and would wipe the floor with any other Japanese ute in a drag race. In everyday driving, the 4-cyl 450 never feels underpowered, but then again, it doesn’t sound anywhere near as good as the V6 of the 550.

Economy remains good: Nissan claims 9.3L/100km and with a steady boot that was nearly achievable. No point having all that grunt if you’re not going to use it though, and we burned through 11.0L/100km – it was worth it.

The 7-speed automatic is also worth a mention. Gear changes are silky smooth and the extra two ratios mean the V6 stays in the sweet spot more often than not. Power and economy are both the better for it. Downshifts are executed just when you need them; smart gearboxes like this are making manuals seem redundant.

The Navara is still one of the best looking utes around, regardless of what’s under the bonnet.

At $67,990 the 550 is not the cheapest on the market, but if you have to have the biggest and baddest, this is it. For your money you get features such as privacy glass, fog lamps, chrome power folding mirrors, dual zone climate control, drive computer, ABS, ESP, side and curtain airbags, big alloys, and more.

Midway through its product life cycle the Nissan Navara has had a cosmetic makeover and some upgraded technology.

Recently we spent a day testing out the new rear suspension upgrades to the Nissan Navara on Australian roads. Now we've tested it in New Zealand.

Nissan has enhanced the Navara’s performance under heavy loads by redeveloping the rear suspension and testing it in Australia, the country where feedback about the ute’s load-bearing ability was loudest.

THE NAVARA RX has been stripped of some luxuries to provide Nissan with a sharp-priced ute – aimed at farmers and tradies who want to pay for the practical stuff, not the gadgets and bling.