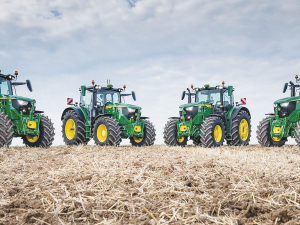 John Deere’s new 6R tractor range will extend to 14 models and power outputs from 110 to 250hp.

Looking at the 6R165 and 6R185, a compact 2765mm wheelbase – already seen on the 145 and 155 variants – should prove popular with those looking for a pocketrocket. It has extra manoeuvrability in the yard and on transport duties, while offering output for high-demand hydraulic functions.

In addition to providing extra power in transport and PTO operations, the IPM power-boost function now also delivers a “kick” in hydraulic applications. This adds up to 20hp in the four-cylinder models and up to 40hp more in six-cylinder variants. This is said to be ideal for those users operating hydraulically driven fans or pumps, typically seen on bale wrappers, drills and slurry pumps.

All four-cylinder models are configured to deliver a 4-tonne payload, complemented by a rear lift capacity of 6.4 tonnes and hydraulic flows of up to 155l/min.

The MY2022 range also appears to offer more transmission choice, where in addition to AutoQuad Plus and AutoPowr, the customer can also choose the CommandQuad option offering speeds of up to 50km/h, depending on local legislation.

The 6R series also features the integrated 1-Click-Go system that offers Auto Set Up for both tractor and implement settings. The company says that the system saves the operator up to 90% of in-field display clicks during operation. All settings can be pre-planned and managed in the Cloud, including agronomic data like field boundaries, guidance lines and prescription maps.

Other points of note are the dashboard, which leaves its usual position behind the steering wheel to a new position on the right-hand pillar/corner post. Meanwhile, a relocated windscreen wiper is said to offer a wider field of view.

The new E-joystick features hand detection and full programmability. This allows users to select favourite buttons for key features and direction changes via the reverser button. A dynamic weigh option for the loader allows the contents of a bucket to be weighed on the move.

Meanwhile, a return to position function allows the loader to return to a pre-defined position with just one button click.