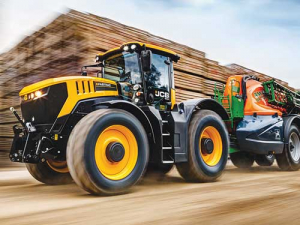 Having recently celebrated 25 years of its iconic Fastrac, JCB has also now pulled the wraps off the new 8000 series, to replace the current high horsepower offerings.

Described as ‘evolutionary’ rather than ‘revolutionary’, the refresh of the 8000 series includes changes to engine, steering and cabin to bring it bang up to date.

It was launched in 2005, starting life with a Cummins 250hp engine; an upgrade in 2011 saw a tie-up with AGCO which resulted in a SISU engine and a CVT transmission sourced from Fendt. That same 8.4L power plant forms the basis of the new models, now rated at Euro Tier 4 and offering rated power of 280hp and 335hp in the 8290 and 8330 models, respectively.

These outputs represent a power increase of 14% and torque rise of 10% over the outgoing units, and go on to peak at 306hp and 348hp as the revs drop. These increases are brought about by revised fuelling and the fitting of twin in-line turbos, which spin up quickly and make the engine more responsive.

The CVT transmission remains the same, although upgrades to software help it deliver 70km/h using various driving modes – including the ‘virtual step function’ which mimics a traditional powershift – and should suit more traditional operators.

As always, suspension plays an important part: coils and dampers at the front and hydro-pneumatic rams at the rear for their load compensating effect.

A new cabin unit, as seen on the 4000 series Fastrac, will be welcomed, its slightly forward driving position offering better visibility and an increased rear load space. Plenty of glass gives a light airy feel, and the raked A post and vertical windscreen help improve headroom for taller drivers. Comfort and functionality gain from climate air conditioning as standard; a new seat design allows 50 degrees of swivel to the right and 20 degrees to the left.

Upgrades to the steering see the old mechanical power-assisted system replaced by dual hydrostatic units, said to improve feel and reduce effort particularly at slower speeds. A new Rapid Steer option can be specified to reduce the number of turns from lock to lock from four to two, and a failsafe mechanism allows steering even if the engine fails.

The tractors are said to be GPS ready, although the in-cab screen has yet to support ISOBUS and this is said to be a little while away.

Capacities remain unchanged at a useful 10 tonnes at the rear and 3.5 tonnes up front; power is supplied by the standard 137L/min, or optional 178L/min, closed centre system. Weighing a touch over 11 tonnes and capable of 780km/h demands proper stopping power -- taken care of by external disc brakes on all wheels, with twin callipers and ABS.

Also available for the first time, and likely to interest our Aussie cousins, is a 3.0m track capability option which will be welcomed by operators using Controlled Traffic scenarios.