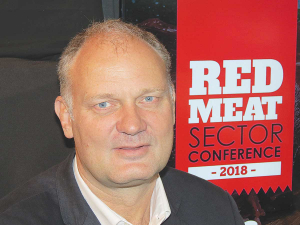 Limmer told Rural News that from a business perspective things are becoming more challenging, and with other countries up and running, there is a risk that if new opportunities arise we will miss them.

"We really need to get rolling again," he says. "We at SFF have taken advantage of one of the MIQ slots for the Dubai Expo that is goint on at the moment. We have one of our colleagues headed up into the market and they are the first person we have had there in 18-months."

Limmer says SFF is working with the Government on a number of initiatives to allows business people to be able to travel, and for it to introduce pragmatic ways for them to self-isolate when they return to NZ.

He says world markets are looking quite strong and demand in many of the countries SFF trades with is good.

"For a number of years, SFF has had a strategy of getting closer to the market, and to that end we have 13 staff in China and people in the USA. This has allowed us to continue to develop important partnerships and give us continuity in these places - we will continue to do this," Limmer explains.

"But, on the other side of the coin, we are exporters and relationships are really critical to us. In some cases, we haven''t been able to sit down face-to-face with people across the world for 18 months. However, I think because of the length and quality of those relationships and partnerships it has been easy enough for us to make contact with them up until now."

Limmer says the sooner they can get back up into the market and find a solution to travel and quarantine the better.

Meanwhile, with meat processing for the new season about to get underway in earnest, he adds that the lack of labour is a major issue which is affecting SFF, which has processing plants in regions stretching from Northland to Southland.

Staff numbers at the company at this time of the year usually rise from 4000 to 7000, but Limmer says this year they'll be about 1000 workers short of their optimal workforce.

"Competition for labour is tough out there with very low unemployment," he told Rural News. "We have a real shortage of skilled workers coming in from overseas for the season.

"These people have come in year-after-year and they have the skills and continuity which we can rely on."

Limmer says the competition for labour across the primary sector and elsewhere is driving wages for labour higher and higher.

"Ultimately, what we have to do is to reconfigure our planning to capture the best value we can for our products and make ourselves as competitive as possible in this environment."

Limmer says SFF is also thinking about automation and how it can streamline its infrastructure to improve productivtiy. However, he adds that this is not something that can happen overnight and is a long term fix, which will require a significant capital investment.

"The short term solution for us is really about freeing up offshor labour to fill some of those spaces," he says.

Freight rates have gone up about 50% in the last 12 months, according to Simon Limmer.

He says this has to be absorbed by all parties through the value chain. Limmer believes this is one of the biggest issues facing his company and a big part of this is uncertainty about the availability of containers.

Consumer expectations is that they are going to see their prices go up, but he says as a company they still have to respond to the competitive realities. Limmer says while some of the increased freight rates will be absorbed by the company, some of the cost increases may be reflected in returns to farmers.

"The disruption to shipping schedules and ultimately how the ports are coping in North America and China. When you see the number of ships lined up there, it is concerning," he told Rural News. "The issue for us is getting chilled product to market because there is a quite a narrow window for doing this. With frozen product there is some flexibility."

Limmer says the logistics is a huge problem and it all goes back to start of the pandemic when key ports around the world closed.

"That was 18 months ago and we have never caught up."

Given these issues and the ongoing uncertainty, Limmer says SFF is working hard to engage more with politicians and policy makers in Wellington. He says the goal is to try and demonstrate that as a company they are working hard to develop pragmatic solutions to the issues thrown up by Covid.

He adds that they would like to have greater input into future government policy. "Our aim is to demonstrate that we are being very progressive and by demonstrating this will probably be better able to influence policy."