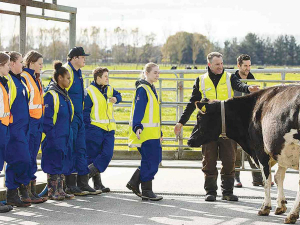 DairyNZ says it is committed to quality workspaces as one of its top priorities.

A South Canterbury dairy farmer has been fined $30,000 for breaching employment entitlements of 24 workers.

The Employment Relations Authority (ERA) ordered Greywacke Farms Limited and Kopetschny to pay $20,000 and $10,000 respectively in penalties for failure to comply with employment law. Of this, $7500 will be paid out to three former employees. The ruling comes as the dairy industry struggles to attract workers to milk cows.

The company ran two dairy farms in South Canterbury that supplied milk to Fonterra while Kopetschny also operated as a sole trader, working as a sharemilker.

In early 2019 the Labour Inspectorate received complaints from previous and current employees.

The Ministry of Business, Innovation and Employment (MBIE) says the investigation revealed breaches of minimum employment standards in relation to 24 workers across the operations. About half of them were migrants on temporary work visas.

ERA member David Beck noted in his ruling that the Labour Inspector did not provide a calculation or estimate of the cost of all of the breaches borne by the employees apart from a few individual examples.

“Viewing the nature and extent of the breaches, I estimate that the sums involved are likely to be reasonably significant and I must have regard of the value to the employees concerned of not getting additional paid days off for working on public holidays and that as low paid employees, the value of wages forgone or part thereof, can cause significant material hardship,” ruled Beck.

“I also consider that in industries that are at times labour intensive the reduction of the cost of labour overheads by illegitimate means gives the perpetrator an unfair competitive advantage over businesses that comply with legal obligations.”

MBIE says the inspectorate found the employer had a complicated rostering system and manually recorded payroll and leave data.

“This resulted in failures to keep compliant wage, time, holiday and leave records, failures to calculate and pay correct holiday pay to eight employees, and failure to pay minimum wage to at least one employee.

“The employer also failed to obtain consent from one employee for making deductions from wages for providing the employee with accommodation.”

“We have been working together with the dairy industry over a number of years to lift employment law compliance.

“The industry made significant improvements to put assurance systems in place and have readily available support for farmers on matters of employment.

“This makes it even more disappointing to find there are still dairy farmers that undermine minimum employment standards. Employers cannot cut their overheads by taking advantage of workers.”