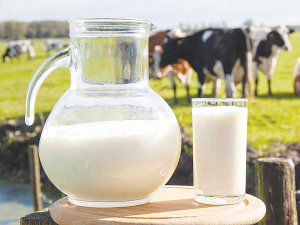 Despite a sixth consecutive drop in the GDT price index, analysts say an $8/kgMS payout is still on the cards.

Dairy prices continue to fall, but an $8/kgMS forecast milk price this season is still on the cards, say analysts.

“We expect prices to drift lower over the remainder of the season, but the pace and size of the easing is a big question,” says Keall.

With global demand and supply still finely balance, he thinks a sharp price correction is unlikely.

Keall says while there are some downside risks to ASB’s forecast of $8.20/kgMS, prices remain very high.

“We still see the makings of a strong season despite the latest GDT result.

“Anecdotally, there are signs too that Fonterra is selling product off auction at healthy prices.”

A weaker than expected New Zealand dollar may add some support to the farmgate milk price, says Keall.

Aggressive Chinese purchases fuelled the boom in dairy prices this year, as the country build ups its strategic stockpile in response to booming domestic consumption.

“But there are now signs Chinese inventory is getting closer to healthy levels, and global production (both in NZ and in the Northern Hemisphere) has lifted in response to the price signals,” he says.