RAV revs up for continuing success 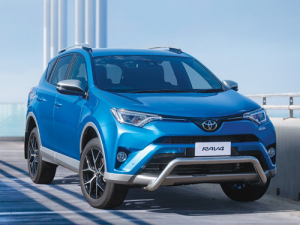 Now entering its 21st year since the launch in 1995, the Toyota RAV 4 has graced the yards or driveways of 28,500 buyers and retains its dominant stake in the competitive SUV market.

Eight times since 2001 it has taken top the spot, including the last four years. To commemorate the milestone Toyota is launching a special Edition 21, limited to 100 units, and sure to be snapped up quickly.

Based on the 2L GXL 2WD variant, and offered in Blue Gem, Ink or Glacier White exterior colours, all have silver accents on the front and rear bumpers, door mirrors and wheel arches. Further detail is lower door mouldings offset by a black back door garnish, also used on the lower section of the rear bumper.

Now in its fourth generation since the 1995 launch, the gutsy little performer shows no signs of lying down, and brings the latest technology to an army of shrewd buyers. That technology includes Toyota Safety Sense, lane departure alert with steering assist, dynamic radar cruise control and automated high beam control.

The package also includes blind spot monitoring, rear cross traffic alert and hill start control, seven airbags, and a rear camera combined with front and rear and parking sensors, which all combine with the solid construction to achieve a 5-star ANCAP safety rating.