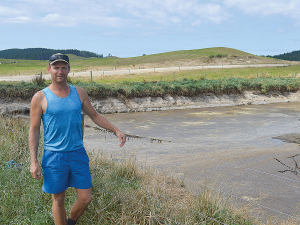 Tokoroa farmer Marcel Korsten operates a closed farm system: what doesn’t get out the front gate as milk has to go back onto the farm.

On his 260ha farm, Korsten hasn’t used nitrogen to fertilise paddocks for seven years; instead the whole farm is fertilised with effluent.

Milking about 670 Friesian cows and having a feedpad means a lot of nutrients are added to their diet. About 45% of feed is imported — mostly soyabean, tapioca, straw, maize sileage and some PKE.

“What doesn’t go out the gate as milk is put on pastures as effluent,” he told Dairy News.

“We haven’t used fertiliser for seven years; to me, coming from the Netherlands, effluent is a real valuable resource — it’s much better than any chemical fertiliser.”

But seven years ago, Korsten’s closed farm system hit a snag; his 50m x 50m effluent pond developed a crust so bad that Korsten and his staff “could walk on it”.

Two staff had to dig for two hours just to get a pipe into the pond to suck effluent out. “It was really bad and we had to do something,” he says.

He hired a digger to remove the crust, costing $18,000; two months later the crust reappeared.

So he turned to BioMagic, having read newspaper articles about the product. He was offered Biomagic’s Impact, an organic liquid.

Korsten says he was told that typical effluent ponds are dominated by anaerobic bacteria.

“BioMagic treatment converts the pond into an aerobic state, dominated by aerobic bacteria; these bacteria digest effluent up to 12 times faster.

“For $270/month I would get microbes that actually eat crust and make the pond live; I thought ‘I haven’t got much to lose for a couple of hundred dollars’.”

But the first six months were anxious moments for Korsten.

“I nearly gave up; for six months nothing happened, then all of a sudden through the crust I could see bubbles coming.

“I was told that the bacteria were working underneath and I just couldn’t see it; I thought ‘whatever!’ ”

Korsten says the effluent pond soon turned into mudpools. “And another six months later the crust was gone and I ended up with a liquid pond.”

Korsten hires a team to spray effluent around his farm every three months.

He says there are no issues now with pumping effluent to paddocks a kilometer away in each direction; the pipes are no longer getting blocked by crusty particles.

Odour is not longer a problem and even the cows notice the difference.

Normally after crusty effluent was applied on paddocks, the cows did not eat the grass for about two weeks; now they happily graze within five days of BioMagic-treated effluent being applied to pasture.

He applies about 15ml of effluent during winter and 20ml in summer.

The company helped him set up a pump, which mixes the liquid with water before the shed wash.

Wash water from the milk shed and feed pad gets nicely mixed with BioMagic Imapct before entering the effluent pond.

Korsten uses about 10L of the product a month.

Thumbs up to farmers, processors from council

A survey of effluent management on the 124 dairy farms in the Tasman region has given thumb up to farmers and dairy companies.

Treating effluent while the sun shines

Handling the challenges of effluent management could become easier with a new product that allows dairy farmers to treat their effluent systems as a routine part of weekly milking shed maintenance.