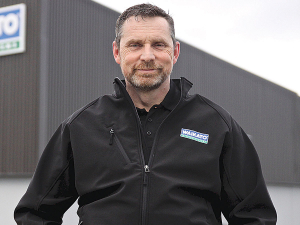 Andy Geissmann believes there’s plenty of scope for Kiwis working in the emerging sheep and goat dairy sectors to export.

A few years ago Andy Geissmann was invited to speak on a farm in China where a dairy consortium planned to milk 500,000 goats.

“We went there and it was the first farm of a bigger project, planning to milk 70,000 goats all in one farm, just two years away from milking.

Geissmann, who recently joined Waikato Milking Systems, has had 20 years experience in the dairy industry, recently with a focus on small ruminants. He is now the product and project manager at its headquarters in Horotiu, north of Hamilton.

Geissmann says the sheer size of the China operation overshadows anything planned in New Zealand, but he says Kiwis should not be discouraged from exporting to China and other countries.

“In China, there are basically two market streams. People who can afford the local produce and those with additional disposable incomes.”

The latter group of consumers don’t mind paying a “premium price” for dairy products made in a country that has a clean, green image.

“And NZ does have the right image.”

Those marketing sheep milk dairy products promoted the idea that the customer was not only buying a NZ made product but buying a piece of NZ too, Geissmann said.

Geissmann sees growing awareness of the nutritional benefits of sheep and goat milk products which “has resulted globally in an increased consumption”.

The lower environmental impact of the two industries is a big attraction for consumers, he said. It is opening opportunities for expansion for farmers and manufacturers.

That includes Waikato Milking Systems, which in 2017 installed a 100 bail, goat rotary milking system in Canada and is now working on similar installations in China.

The company is also aiming to do more in NZ to help the sheep and goat industry meet demand. “We want people to know we’re dedicated to sheep and goat dairying and are not just transforming a cow milking system into something smaller,” Geissmann said.

“We want to use our knowledge and farmers’ expertise to further develop milking systems specifically suited to small ruminants.”

He said it is important to understand that the behaviour and physiology of sheep and goats is different.

All of these traits need to be taken into account when building milking systems to handle the animals.

The company’s milking platform in the market can handle both sheep and goats.

“We have worked closely with farmers in the design of our milking platform. The result is a system that is well received for its milking performance and durability.”

Geissmann is on the Waikato Milking Systems Fieldays site (F45-M12-M14) and the SheepMilkNZ site (J22).

Sixteen dairy sheep farms NZ-wide are milking about 15,000 ewes. The sheep milking industry is growing by three to four farms a year but many more are needed to satisfy the global demand.

Geissmann says some farms are producing for niche market outlets and others produce for the local and export markets.

Some farms want to expand commercially by producing their own milk and collecting milk from other farms to process. In the sheep dairy business these include Kingsmeade in Manawatu, Antarag Ag Dairy in Southland, Thorvald in Nelson, and Spring Sheep and Maui Milk in Waikato.

The Dairy Goat Co-operative collects milk from its farmers in many North Island regions to process at its plant in Hamilton.

The Ministry of Primary Industries does not report separately on the value of the sheep and goat milk industry, but includes it as one report on dairy.

The ministry said there is data showing the global market for goat milk was worth US$330m in 2013 and is now worth US$390m.

Data from the UN Food and Agriculture Organisation showed the world volume of goat milk increased from 10m tonnes in 1990 to 17.5m tonnes in 2017.