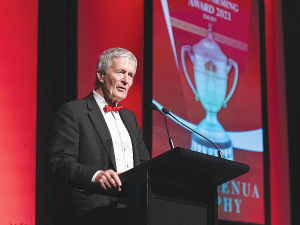 He says he was also aware that the properties of the other two finalists were also great examples of excellence in Māori farming. He says it’s a pity more people don’t see at first hand the quality of Māori farms.

“At the awards dinner the Ambassador for Japan spoke to me and said it was a wonderful night because it gave him an insight into some of the history of Māori culture and the land which he compared to what happens in some places in Japan. I guess inviting more people to be exposed to that would be a wonderful development,” he says.

O’Connor says NZ has the opportunity to be unique in the world and part of that is incorporating Māori values in the partnership that is NZ. He says values such as manaakitanga, meaning respect, humility, kindness and honesty, Kaitiakitanga, meaning guardianship and protection, and Te Taiao, the environment that contains and surrounds us, are special values. He says if NZ can capture that and implement it well, the world is our oyster and we will be the premium producers for the world.

O’Connor who heads for Europe soon to try and kick start important free trade talks with UK and Europe says the Ahuwhenua awards are a great example of what NZ is about.

“I would to kind of bottle up what we have here tonight and take it and deliver it in a short sharp burst to all the ministers we trade with, and give them an understanding of the passion we have for the land and what we are trying to do in terms of development,” he says.

O’Connor also praised the contribution that former Agriculture Minister John Luxton has made to the dairy industry. Luxton, who is ill, came along to the awards evening and says he enjoyed every minute of his time there meeting old friends and colleagues. O’Connor described Luxton as a stalwart and champion of the dairy industry and it was great to see him at the event. Luxton is also chairman of Pouarua Farms – one of this year’s finalists in the competition.

Fonterra chairman Peter McBride who was at the awards dinner says Maori farming and leadership is really valuable and says that it's important that the awards recognise this. He says he was really impressed with all the contestants, including those in the Young Maori Farmer competition.

"Maori think intergenerationally and that is really important for an intergenerational co-operative. So the question is 'how do we bring that into Fonterra' and that's what we have to be focused on - Maori values in Fonterra. Not just into the narrative but actually I want them (Maori) to feel included and I think these awards are really important," he says.

McBride says that's why Fonterra is proud to be a sponsor of the awards.