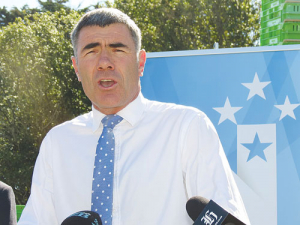 Farmers’ confidence is at its lowest since 2009 and it’s mostly due to the new Government, says National’s Agriculture spokesperson Nathan Guy.

“While there are international issues like Brexit and potential trade wars causing concern, most of the pessimism is resulting from Government policies,” says Guy.

Guy says other potential headwinds adding to the unrest include proposed restrictions on hill country cropping, winter grazing restrictions, increased union access and the likely recommendation of the Tax Working Group to add a Capital Gains Tax to the family farm alongside a new suite of water and environmental taxes.

“Mr O’Connor has confirmed that when it comes to soaring costs and taxes on farmers that there are more coming. The Minister arrogantly told Rural News last year that farmers need to ‘get used to it’.

“This is on top of a skills shortage due to immigration policy, coupled with the Government sitting on its hands while letting Taratahi go into liquidation. The Government’s industrial relations reforms are set to increase costs even further, starting with a hike in the minimum wage on April 1.

“It seems the Primary sector – which is New Zealand’s biggest export earner – turns out to be the biggest loser under this Government. The Primary Sector is being punished by this Government’s policies, and farmers have every right to be in fear.

“It will take more than Shane Jones cynically dishing out cash to the regions to turn farmers confidence around.”